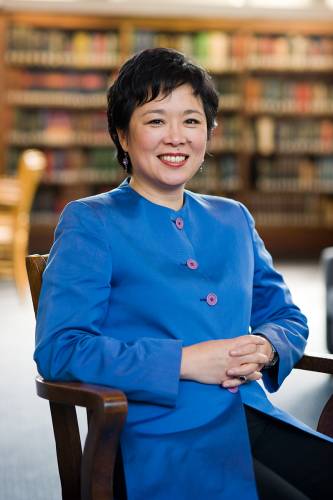 In her lifetime, Dr. Su Yon Pak has occupied many chairs.

A native of South Korea — and a cradle Presbyterian — Pak immigrated to the U.S. at the age of 10. After graduating with a degree in organic chemistry, she earned her master’s degree in Christian education at Princeton Theological Seminary. Pak has since lived in Scotland, where she worked at Shakti Women’s Aid in Edinburgh, a women’s shelter and center for women of color.

In 1993, Pak made her home in New York City, where she received her doctorate from the joint Teachers College-Union Theological Seminary program in religion and education. She has since worked at Union Theological Seminary in the City of New York in various capacities, currently as its senior director and associate professor for integrative and field-based education.

Pak also chairs the Professional Conduct Task Force of the American Academy of Religion (AAR) and has served as the chair of the Status of Women in the Profession Committee, co-chair of the Asian North American Religion, Culture and Society program unit, and as a steering committee member of the Women and Religion Section of the AAR.

But of all the chairs she has occupied, by far her favorite place to sit is in a pew at her home congregation, The First Presbyterian Church in the City of New York, which celebrated its 300th anniversary in 2016. Pak chaired the church’s 300th Anniversary Committee and serves as an elder for the congregation.

Inspired by the church’s history of outstanding preaching, Pak found herself considering the preacher’s often daunting task of revisiting lectionary passages for a fresh word, and was determined to offer practical assistance. “Returning year after year to familiar texts and searching for new inspiration can at times be an exciting challenge,” says Pak, “but it also can be frustrating or exhausting.”

To best meet the continuing education needs and busy schedules of Union’s own alumni/ae and the seminary’s neighbors who are serving — and regularly preaching in — congregational settings, Pak has collaborated with Union’s Alumni/ae Relations Office to reintroduce and sponsor the popular Got Sermon? lectionary study series as a twice yearly, day-long conference corresponding to the liturgical seasons of Advent and Lent.

Launched in 2008, Got Sermon? was designed to bring the gifts of Union’s faculty to primarily parish-based preachers seeking inspiration for the homiletical task during the most demanding times of the year. Got Sermon? will be offered next on Feb. 9, 2018, for the study of Lenten/Easter texts.

In addition to giving participants the opportunity to explore the exegetical intricacies of the texts for liturgical seasons, conferences will offer the option of doing textual studies on a theme, such as interreligious engagement. New to the series will be sessions dedicated to homiletical methods and practice, coaching, and peer coaching. As always, there will be the added benefit of building community and sharing a meal with friends and preaching colleagues.

“Many who have attended this series in past years have said that because they often felt isolated pastoring their own churches, they welcomed this community of learners who engaged these familiar texts in order to bring fresh words to their congregants,” says Pak.

The lead instructor for Got Sermon? will be the Rev. Dr. Lisa Thompson, assistant professor of homiletics, with the Rev. Dr. Cláudio Carvalhaes, associate professor of worship, preaching and leading opening worship.

The cost of each day-long conference is $50, which includes lunch. Preregistration is required. Complete information is available on the website.

Loving God, as we seek to serve you wherever we are planted, we ask you to help us bear fruit, to proclaim your good news, and to share your love with others. Bless us, we pray, as we seek to be faithful in word and deed. Amen.