Aware that educational mission played a key role in their native land’s development, members of the Korean Presbyterian Church in Fresno, California, want to strengthen Presbyterian education in the Democratic Republic of Congo.

Last year, Korean Presbyterian gave $80,000 to replace a deteriorating mud-and-thatch school building in Congo. Thanks to this generosity, students at Lusamba Primary School now enjoy a new building constructed with durable materials. The congregation worked with the Presbyterian Community in Congo, which operates the school, Presbyterian World Mission and the Congo Mission Network on the project. People from the surrounding Kalonga Mpoyi village provided most of the labor. 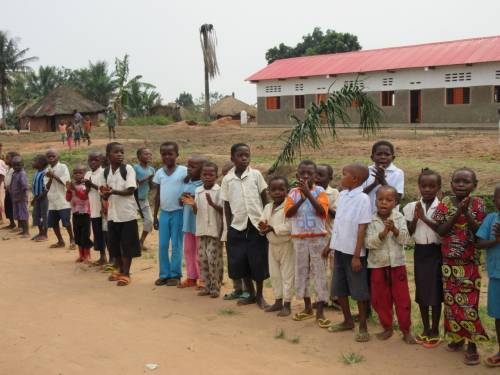 Students and staff of Lusamba Primary School formed a receiving line in front of the new school to welcome Her Excellency Provincial Minister of Education Madame Gabrielle Kamuonyi as the chief guest at the school’s inauguration ceremony on Sept. 10, 2016. (Photo by Gwenda Fletcher)

Korean Presbyterian’s interest in Congolese education began in 2014, when two of its members, elder Man Jong Yoo and deacon J.R. Lee, visited Congo. When they returned, they talked about the educational needs in Congo and pointed to the role education played in moving South Korea from poverty to prosperity in the 20th century.

“In my country, Korea, education was a part of building up the country, and many missionaries helped with that,” Man Jong said. While in Congo, he and J.R. detected a great desire for learning, but they saw a dearth of resources.

“The children of the Democratic Republic of Congo really want to learn,” Man Jong said. “It was the same way in Korea. Everyone in the family really wanted to study. People in Congo know education is the only way you can get out of poverty.”

Yet Man Jong and J.R. also saw the poverty-related challenges that impede education in Congo.

“There were more than 150 students in one classroom,” Man Jong said. “Many were sitting on the floor. There were not enough tables and chairs for all of them.”

Fortunately, Lusamba has moved beyond conditions like these. Today students enjoy desks, chairs, blackboards and classrooms that remain dry on rainy days. 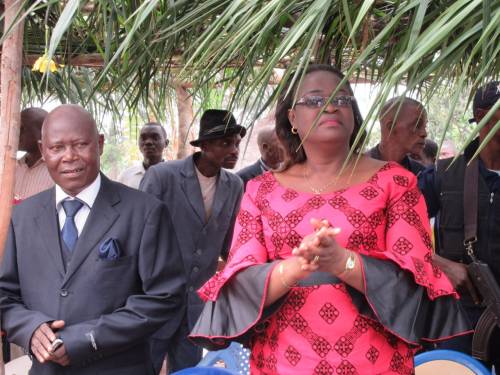 In fall 2015, Daniel Ha, a member of Korean Presbyterian, attended a Congo Mission Network meeting and learned about the network’s efforts to promote education in Congo, including school construction. He then told his congregation about the opportunity to participate in a school construction project. In less than two months, the congregation raised all of the funds necessary to build the school. Four schools have been built through the network’s efforts, but Korean Presbyterian of Fresno is the first congregation to partner with the network to finance an entire school project.

Man Jong said it did not take a vigorous push to get the congregation to respond. “It all just came together,” he said. “Nobody did anything heroic.”

In addition to the school construction project, the congregation provides financial support to mission co-workers John and Gwenda Fletcher, who serve in Congo, Bob and Kristi Rice, and Ruth Brown. Bob, Kristi and Ruth have recently moved from Congo and have been reassigned to new positions in South Sudan and Zimbabwe, respectively.

Gracious God, we plant and water the seeds, but you alone give the growth to our mission and outreach projects. Keep us faithful in our work in your vineyard. May our labors bear fruit as we help others discover and develop their God-given gifts. Through Jesus Christ our Lord we pray. Amen.