Two representatives of the Mexican Communion of Reformed and Presbyterian Churches (CMIRP) recently met with Presbyterian Church (U.S.A.) World Mission staff in Louisville to explore the possibility of engaging in mission together.

The Rev. Silfrido Gordillo-Borralles, the group’s general coordinator, and the Rev. Dan Gonzalez Ortega, president of the Theological Community of Mexico, an institution composed of six seminaries in Mexico, met with World Mission Director Jose Luis Casal and Valdir Franca, coordinator for Latin America and the Caribbean.

In addition to the practical aspects of partnership, Gordillo-Borralles said the two organizations share a history and common missiology. As part of its self-description, CMIRP “encourages commitment to other organizations, movements and churches of other Christian traditions through dialogue and cooperation in ministry.”

Like the PC(USA), CMIRP recognizes its historical links with the Reformed churches of the 16th century, as well as those inherited by the Protestant and Presbyterian movement of the 19th century in Mexico and its continuing solidarity with Reformed churches throughout the world. Similarly, CMIRP is committed to issues of inclusion. The primary reason it formed as a distinctive Reformed group in Mexico was its support for the ordination of women. 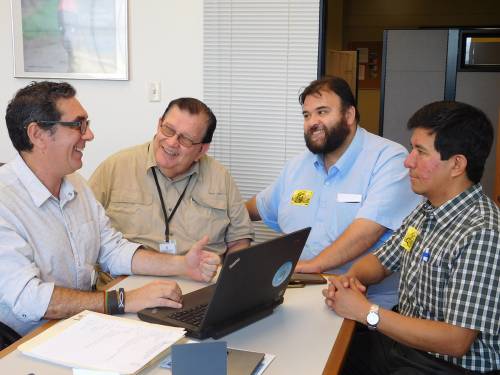 The visit was another step in the journey toward partnership that has been an ongoing conversation. The mutual benefits of such dialogue became even more clear while the delegation was in Louisville.

As the meetings began, Mexico was rocked by an earthquake registering 7.1 on the Richter scale. The quake was the second to strike the area in two weeks and had a death toll of more than 300.

“I felt anguish,” Gonzalez Ortega said. “I just wanted to jump through the window and be there immediately to help.” Both men knew their families were safe, but shared their anxiety about their churches, their seminaries and their communities.

Gonzalez Ortega said they were very interested in learning from Presbyterian Disaster Assistance about how to build their own capacity to assist communities in these types of disasters. “In all areas, we are seeking to learn from the PC(USA)’s experience and conceptualize it to our own reality,” he said. “We will grow and strengthen through this partnership.”

Gordillo-Borralles said CMIRP is a community of congregations and each one was reaching out to participate. Because of their respect as a theological community and their history of accountability, they would also be able to receive funds from international organizations to deliver aid to those who need it quickly.

The pastors have already made plans to continue the partnership conversation and work toward drafting a formal letter of engagement.

“Because of our shared theology and Christian values, we believe this is a natural partnership that will continue to flourish in the future,” Luis Casal said.

Most loving and compassionate God, may your comforting presence and abundance of grace be on our service providers, churches and communities who have suffered immense loss from natural and human-made disasters. Amen.