Folks living at Westminster Oaks Retirement Community in Tallahassee, Florida, have lived through some of the chapters of history that students study in class today. Chaplain Taylor Phillips reaches out to area high school and college classes, inviting teachers and students to come to the Westminster Oaks campus to hear the residents share their eyewitness accounts of historical moments.

Harold Hansen worked on navigational systems for air and space flight. Throughout his career, his work was used on everything from the B-50 bomber to the Hubble telescope, and he served as the project engineer for the lunar module. 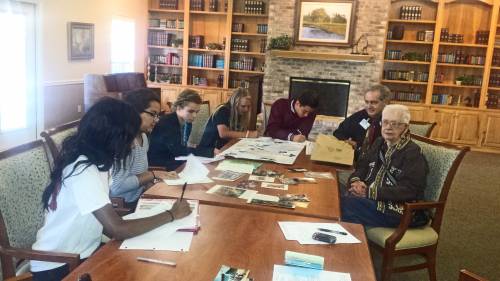 Dr. Jack Early worked in community development in Guatemala in the 1980s. One of his projects involved reporting the increase in infant mortality rates, which was one of the consequences of the civil war there. Here, he shares his story with students from the Rho Kappa Social Studies Honor Society of Florida State University School.

Westminster Oaks has a covenant relationship with the Presbyterian Church (U.S.A.). Students visit Westminster Oaks for the rare opportunity to meet and talk with residents and hear details they won’t get from books or videos.  The experience “challenges the traditional way society views the elderly,” says Sandy Saintilus, a sophomore with the FSU Center for Global Leadership and Social Change.

Students have also entered unique projects in the Florida History Fair/National History Day competition.  In 2013, Lincoln High School student Natalie Jones created a video documentary on resident Mary Sakamoto and her family’s escape from the Japanese-American internment camps during WWII. From this experience, Jones was introduced to the Japanese culture and went on to be awarded a college internship in Tokyo this past summer.  In 2015, Lincoln High School student Nathan Morse interviewed resident Louie Wainwright, and his project “Gideon vs. Wainwright” placed second in state, top 10 nationwide and top 20 worldwide.

Students will be hearing from many more residents whose stories come from experiences all over the world, throughout the past century!

Gracious God, thank you for older adults who freely give their love, gifts and resources for the good of the church. They inspire everyone to do the same. All this is to your glory through Jesus Christ. Amen.