‘The Word on the Street’ explores how faith influences daily living 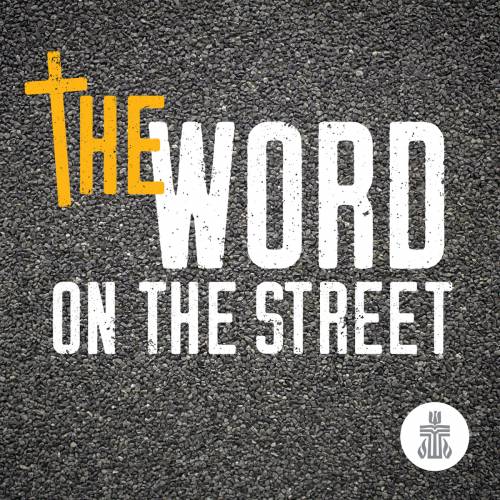 In the first episode of a new podcast called “The Word on the Street,” hosted by the Presbyterian Mission Agency’s Charles Wiley and Alonzo Johnson, a Kentucky Hall of Fame broadcaster recalled being in a person’s home during a time of tragedy and being asked to pray for them.

Mark Hebert, a longtime reporter for WHAS-TV in Louisville, told Wiley in an interview that even though he was supposed to be an objective reporter, he always felt the “right thing” to do was “to pray with and have compassion for the family.”

Wiley, of Theology, Formation and Evangelism, and Johnson, of Compassion, Peace and Justice ministries in the Presbyterian Church (U.S.A.), love talking with people about how faith in Jesus Christ shapes their lives. In their twice-a-month podcast, which debuted Oct. 18, Hebert’s memory of praying with those who had experienced tragedy jumped out at them.

“Pastors refer to this as entering into holy spaces,” Johnson said in the initial podcast episode, called “Look, Ma, I’m on TV.”

“It never would’ve occurred to me that a reporter had this kind of role with people,” added Wiley. “I think of them as asking hard questions, not as knocking on the door of a grieving family and ending up being present to their pain — no longer as an objective reporter, but as a real person.”

During the interview with Wiley, Hebert also talked about one of his most intense experiences — interviewing a death row inmate before his execution. Johnson realized he knew the prisoner who’d been executed because Johnson served as a volunteer prison chaplain in the 1990s.

“I knew it had touched Hebert, just the way he talked about the sanctity of life,” said Wiley. “Then to hear how it impacted Alonzo, it was like I was learning all over again.”

These are the types of podcasts Wiley appreciates the most — where unexpected things happen. “For better or worse,” he says, that’s the approach “The Word on the Street” is taking, “where one jumps in and sees where things go.”

Wiley hopes each interview and conversation he and Johnson have will spark others to consider how they might be faithful in their daily lives. Johnson wants listeners to feel that they have a place to go to hear theological voices they might not have heard before and that the conversation will be relevant and inspiring to them.

“Alonzo and I see things differently,” Wiley acknowledges, “but on ‘The Word on the Street,’ we both want to connect unity, reconciliation and justice to the core convictions of the Christian faith — to Christ’s death and resurrection and the mission the church should be engaged in.”

“The Word on the Street” is available on Apple iTunes, Google Play and other podcast services.

Today’s Focus:  ‘The Word on the Street’ podcast

O God, help us to deepen our faith, and show us how to hold our neighbors in the light of peace. Amen.