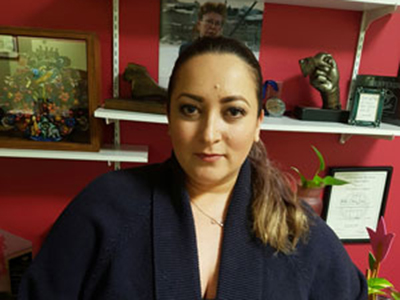 Lydia Cordero Cabrera has a difficult job. As general director for a crisis center in Mexico, she works daily with women who are facing life-and-death situations in their homes. The center, Casa Amiga Centro de Crisis, is in Ciudad Juarez, Chihuahua, Mexico, across the border from El Paso, Texas.

“We provide legal and psychological counsel for women and children that have survived violence,” she said. “Another part of my work is also preventing [violence] and raising awareness on other issues, including sexual abuse of children.”

Cordero Cabrera shared her stories with churches, schools and other institutions as part of the International Peacemakers Program.

Cordero Cabrera has been with Casa Amiga since 2001 and moved into her current role in 2015. The center provides a full range of services, including social work and women’s medicine. The facility also provides a secure, undisclosed shelter for women and children in domestic abuse situations.

“When I came to the office, I realized this was going to be a big job. I was a witness when a woman was murdered at my work by her husband,” she said. “From that moment, I realized I was sent to make a difference and would try to help them overcome their issues.”

After having processed numerous cases at the center, Cordero Cabrera says there are some she will never forget.

“I met a woman who had tried to commit suicide, but she also wanted to kill her three children as well,” she said. “The oldest daughter realized what was going on and was able to stop it. Once that happened, the woman came to us for help. Now I see that she is a much better person. Those types of cases keep me going and doing this kind of work.”

Cordero Cabrera also participates in various networks and advocacy efforts for women. She also serves as adviser to the Municipal Council of Social Development and Citizen Participation as well as the Municipal Institute for Women, and she has played a major role in collaborating with other institutions to create law enforcement protocol when dealing with cases of violence against women in Ciudad Juarez. She has presented at several forums on violence against women in universities in Ciudad Juarez, Mexico City and Guanajuato, Mexico.

Cordero Cabrera says she hopes the congregations and organizations she has spoken with now have a better understanding of the struggles that women and children face in Mexico.

“Organized crime has been devastating in our community, but I have found a lot of help from the Presbyterian Church in El Paso,” she said. “The church’s support has made a huge difference in my community.”

Since 1984, more than 300 International Peacemakers from nearly 60 countries have been hosted by 160 Presbyterian organizations.

God of grace, we thank you for your love. Help us create life-giving patterns of community and make us instruments of your peace. In the name of Jesus Christ, who came so we might have life in all of its fullness. Amen.