Pastor, young parishioner bond over the summer while building electric guitars together 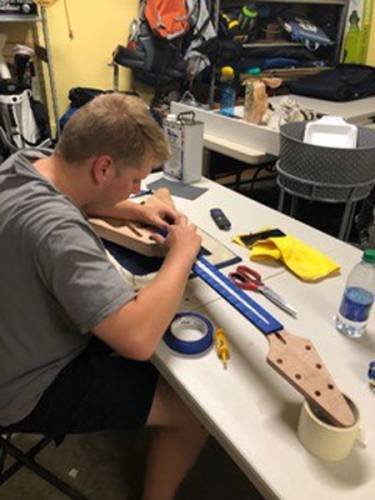 Sixteen-year-old Brandon Earley and his pastor, the Rev. Dr. Neal Carter, chose an unconventional route this past summer to grow closer while discussing Scripture, theology and anything else that came to mind during long hours spent on a hobby they now share.

The two worked together to meticulously construct electric guitars from kits — Earley a BC Rich Warlock made famous by the heavy metal band Mötley Crue, while Carter completed a Flying V that Earley chose for him.

After they’ve each painted their Axe over the coming weeks and completed wiring and stringing their guitars, the two will ready some Presbyterian riffs in and around Concord, North Carolina, a Charlotte suburb, where Carter plays his acoustic guitar and sings in area breweries nearly 50 nights each year.

“They are a little flashy for a Presbyterian church,” Earley said of their summertime creations. “We’ll probably play them outside of church.”

While working together in the Earley garage, “we’d sit there and talk music, talk Scripture, theology — how it works with a teenager today compared to how it works for a 55-year-old guy,” Carter said. “He is an Eagle Scout and a great kid who learned to play (guitar) on his own — and his dad, Brad, works for an auto parts company,” which allowed the guitar builders access to electric guitar necessities like discounted metallic pain and 1000-grit sandpaper.

Carter, the pastor and head of staff at Rocky River Presbyterian Church in Concord, said he’s taken to heart a theological argument made by the Rev. Dr. Samuel Wells, former dean of the Duke University Chapel: that the Trinity, the eternal persons of the Godhead, are with one another.

That’s a helpful model for ministry, Wells points out. In addition, the gospels are replete with images of Jesus being with the people he encounters, “presenting God’s grace to them with his own incarnational presence,” as Carter puts it.

“My wife (Deb) and I were taken aback that a young man wanted to build guitars with his pastor,” Carter said. “How many times in the Reformed tradition does incarnational ministry, youth and Flying V guitars intersect with a Presbyterian minister?”

For his part, Earley earned his Eagle Scout medal and saved enough money to purchase the kit he wanted before the two began their work in late May. They found time to ply their new trade together once or twice each week.

“He is a funny guy,” Earley says of his pastor. “He likes Led Zeppelin and I like Pink Floyd, but we just get along really well.” Earley said the guitar he put together is a homage to his favorite album, Mötley Crue’s “Shout at the Devil.”

“It’s something,” he said of his guitar, “that I hope to keep for the rest of my life.”

When Carter brings an acoustic guitar to a brewery gig, up to 30 of Rocky River’s 330 members show up to encourage their pastor.

“I tell people I used to pay for therapy,” he said with a laugh. “Now I get paid for it.”

“It’s neat that this congregation gives this kind of support,” he said. In addition, “People who would never show up at church say, ‘There’s that minister guy!’ They’re great.”

Loving God, glad are we to reach out with good news to disciples and would-be disciples around the corner and around the world. Inspire us to venture into new places of witness and service, all in obedience to Jesus Christ. Amen.