What’s in a name? A lot. Names reveal who we are 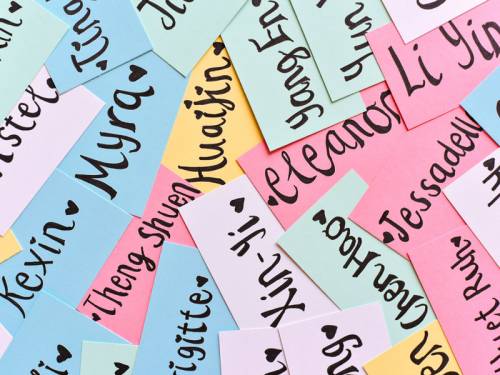 In the late ‘80s, my spouse Loyda and I, originally from Cuba, moved to Louisville with our small children to attend seminary. A fellow white Anglo student tried to say Loyda’s name but kept mispronouncing it. He finally asked, “Why don’t you change your name?” My wife replied, “If I have to learn how to pronounce yours, you better learn how to pronounce mine.”

It’s the time of year when we hear once again from the prophet of Advent — Isaiah — who shares with us the many names of the promised Messiah: For a child has been born for us, a son given to us; authority rests upon his shoulders; and he is named Wonderful Counselor, Mighty God, Everlasting Father, Prince of Peace.

Our names are important. Names can tie us to our ethnic origins and cultural traditions. Names can also reflect something that mattered to our parents in choosing what others would call us. For migrants who leave everything behind, such as family heirlooms and even an ancestral home, their names might be the only thing that ties them to their native lands.

In the Bible, especially in the Hebrew Scriptures, names are descriptive and rich in symbolism. Some names signify origin. Other names denote purpose or depict a person’s traits, environment, identity and personality. In his book “Let Justice Roll Down,” Bruce C. Birch tells us that names for the Divine in the Hebrew Scriptures “describe God’s salvific actions to restore wholeness in concrete, physical, sociopolitical terms as well as God’s concern for wholeness in relationship and spirit.” Examples of this include El Shaddai, meaning “my Redeemer lives”; Yahweh Yireh, “the Lord will provide”; and Jehovah Rapha, “the Lord who heals.” Names say a lot. They also can reveal prejudices we might not even know we have.

For years, immigrants of every persuasion and origin had to conform to the patterns of the English-speaking, white Eurocentric society that originally colonized most of North America. Many immigrants from non-English-speaking European countries had their names changed by schoolteachers or clerks who could not spell or pronounce the original name. Still others voluntarily changed their names after confronting xenophobia and racism. Some would change their names attempting to fit better into the American culture to obtain a better job. In the entertainment industry, actors’ birth names were changed at the suggestion of studio executives who wanted names that were more acceptable to the public ear. Richard Valenzuela became Ritchie Valens; Ramón Estévez became Martin Sheen; and Margarita Carmen Cansino became Rita Hayworth.

This type of discrimination is what I call “forced assimilation,” which gave origin to the melting pot in the United States, where all citizens would have to literally “melt” into one homogeneous culture with English as its language and Western worldviews or face ostracism and discrimination.

The implied or unconscious bias that lurks in our names is unfortunately still part of our ethos. Statistics show that applicants of color with non-English names have to send about 60% more job applications to get a positive response from employers than their white counterparts of European descent. This bias is even in the church, as a pastor nominating committee, for example, may have second thoughts about interviewing an otherwise qualified candidate with a Korean or African sounding name. But there is an ever-growing crop of bi-national, bilingual and bicultural citizens who are sharing their foods, their music and their worldviews publicly and proudly. Reversing previous trends, many public figures — especially entertainers from other countries and cultures — are keeping their given names, signaling that the “melting pot” is becoming a “salad bowl” where all flavors, textures, colors and shapes are maintained.

God of new beginnings and second chances, we thank you for never giving up on us. We thank you for the blessing of diversity that calls us to be a truly multiracial, multicultural church. Keep our hearts and minds welcoming into our communities of faith. Amen.