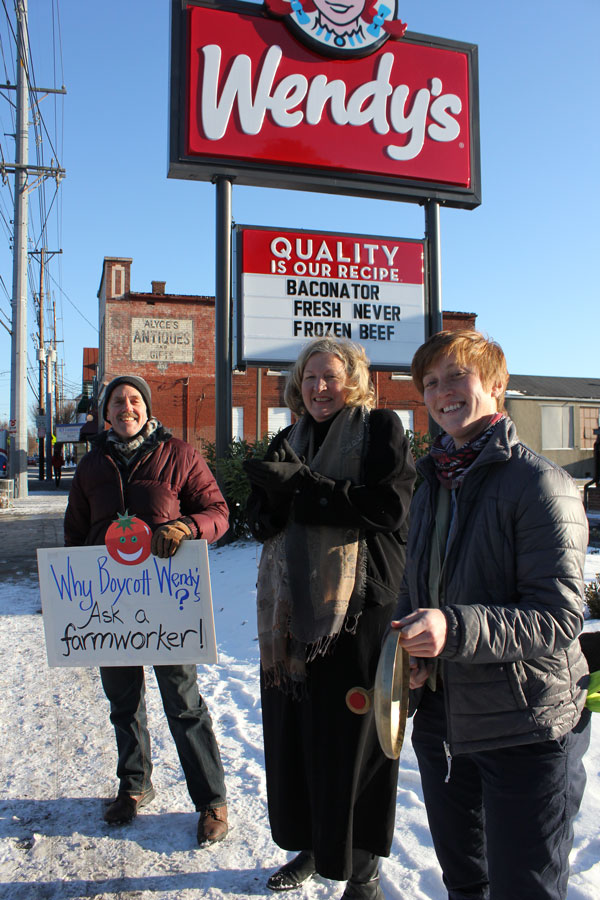 Stephen Bartlett, Sara Lisherness and Kelsey Voit take part in a vigil outside of a Wendy’s restaurant in Louisville, Kentucky. Photo by Andrew Kang Bartlett

Fasting clergy and staff from the Presbyterian Church (U.S.A.) joined with congregation and community members for a Jan. 18 vigil at a Wendy’s restaurant in Louisville. The witness was one of nearly five dozen taking place at Wendy’s restaurants across the U.S. on the National Day of Fasting and Witness. As many as 160 clergy and faith leaders took part in the fast.

The action was organized in protest of the fast-food giant’s ongoing refusal to protect farmworkers’ rights by joining the coalition of Immokalee Workers’ Presidential Medal-winning Fair Food Program (FFP).

A five-day Freedom Fast and major march by farmworkers and allies will take place March 11–15 outside the New York City offices of Wendy’s Board Chair Nelson Peltz.

As temperatures hovered in the 20s, Presbyterian pastors in Philadelphia stood outside of two Wendy’s restaurants. Bruce and Carolyn Winfrey Gillette, co-pastors of Overbrook Presbyterian Church, and Deacon Grace Marable with Bethel Presbyterian Church joined two rabbis and a United Church of Christ pastor to witness, speak with the managers at both restaurants and hand out flyers.

For more than four years, Wendy’s has refused to join the FFP to protect farmworkers’ rights in the retailer’s supply chain. Instead, the fast-food company shifted its tomato purchases from FFP farms in Florida to Mexico, where workers face widespread labor abuses, including sexual harassment and assault, without access to protections.

Despite documented human rights violations in Mexican agriculture, Wendy’s responded to concerns about abuse in their supply chain in an October 2016 statement that read, “We are quite happy with the quality and taste of the tomatoes we are sourcing from Mexico.”

Organizers of the fast chose Jan. 18 to commemorate the 20th anniversary of the historic 30-day hunger strike by farmworkers in Florida. That strike laid the groundwork for the development of the FFP, which is widely recognized as the most effective means of preventing sexual abuse and forced labor in the agriculture industry today. Fourteen major retailers, including McDonald’s, Burger King and Walmart, have joined the program, purchasing exclusively from producers that uphold a strict human rights code of conduct that includes a zero-tolerance policy for slavery and sexual harassment.

“Wendy’s four major fast-food competitors all participate in the Fair Food Program. Wendy’s has a moral obligation to do its part in ending the sexual abuse and human rights violations among the people who grow and harvest our food,” said Sara Lisherness, director of Compassion, Peace and Justice at the PC(USA).

Participating retailers also pay a “penny-per-pound” premium, which is passed down through the supply chain and paid to workers by their employers.

“People of faith have a special role to play in accompanying the farmworkers as they work to reshape the industry,” said Rebecca Barnes, coordinator of the Presbyterian Hunger Program. “Presbyterians can visit pcusa.org/fairfood to learn ways to advocate for a fair food nation.”

In addition to the PC(USA), other supporting faith-based institutions include the United Church of Christ, Unitarian Universalist, Interfaith Worker Justice, National Council of Churches and T’ruah: The Rabbinic Call for Human Rights.

Dear Lord, sustain us as we seek to sustain each other: in the beauty of your kingdom, with the bounty of your earth, amid the needs of your cities and through the fellowship of neighbors working together. Amen.