Life in Lima ‘rich and unexpected’ for mission co-workers

As mission co-workers, we want to give you some idea of what it is like to live in Lima, the capital of Peru, home to some 12 million people. These events from recent months demonstrate some of the diverse ways we engage in life with Peruvians: 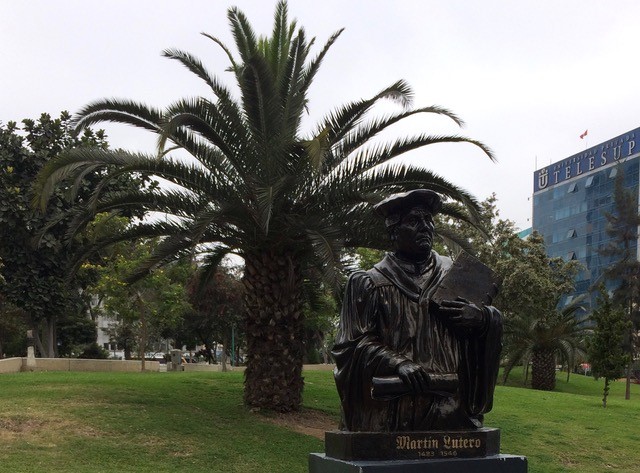 The bust of Martin Lutero dedicated in Lima on Reformation Day.

On Oct. 31 we were invited to a dedication of the new bust of Martin Luther in one of the city’s largest parks, near downtown Lima.  Since the community of Reformed Christians is small in Peru, perhaps just 1 percent of the population in this largely Catholic country, I expected only a handful of attendees. Imagine my surprise when I arrived to find a whole section of the park recently painted for the occasion, a marching band playing traditional Peruvian music and reporters. The crowd included hundreds of pastors in suits, three school choirs, various church representatives, leaders from the Bible Society and the executive secretary of the Latin American Association of Reformed Churches, Dario Barolín of Argentina. Lutherans, Scottish, Peruvian and Korean Presbyterians — together we represented the whole gamut of Reformed Protestantism in Lima.

Our partner church, the Iglesia Evangelica Peruana, was founded by Scandinavian and British evangelists in the 1800s. On this day evangelicos, or Peruvian descendants of Protestantism, were one of many denominations with Reformed roots represented at the dedication of the bust of “Martin Lutero.”

Do you suppose Martin Luther could have had any idea of the impact of his actions when he posted the 95 Theses on that church door 500 years ago? It seems that the mayor of Lima is Lutheran. As we waited for him to arrive and kick off the event, I noted the guinea hens that strutted past us and the palm trees waving in the sun. As we sang “A Mighty Fortress is our God” in Spanish, I was glad to take part in what he started so many centuries ago in Germany. 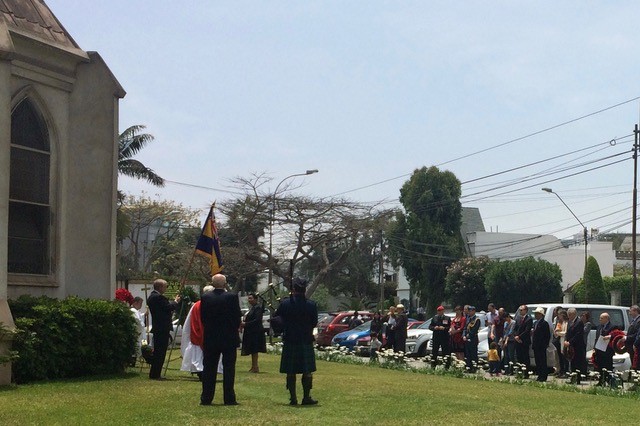 On Nov. 12, the British community gathered in the Anglican Cathedral to celebrate Remembrance Day. The British Legion was selling poppy boutonnieres at the door. A Canadian in a kilt piped in the clergy, and the standard-bearers followed, as did the veterans, some in wheelchairs. The U.S. ambassador was there, and the Peruvian army sent a delegation that filled four pews. Many representatives from families of British descent attended in formal dress. The hymns and Scriptures celebrated the men who were worshiping in this Lima church when they went off to fight in World Wars I and II. Their names were read aloud during the service. I was struck by the extensive lists of men honored that day. The British community has had a large impact on Peruvian history in its 150 years here.

Just two days earlier, the Peruvian soccer team had played New Zealand for a place in the World Cup playoffs. Even though the game was broadcast at 10 p.m., most Peruvians were watching. To say they are fervent fans is an understatement! Over five million Peruvian soccer shirts were sold that day in Lima. The first game ended in a tie, which was to be resolved on Nov. 15, as the two teams met again, but this time in Lima. The home team advantage meant a stadium packed with Peruvian fans.

On game night when Peru scored the first goal, Chilean seismologists say that millions of fans jumping for joy caused their equipment to register an earthquake. Streets resounded with fireworks. The second goal assured Peru’s place in the World Cup playoffs next year. After the game, the French referees said that this was the most passionate soccer event they had ever seen. Promotions for package tours to Russia for next year’s World Cup are everywhere.

Meanwhile, changes in immigration laws affect our lives as mission workers. New Peruvian immigration laws make it easier for foreigners to apply for residency. This is the equivalent of the U.S. green card. It would make our lives much easier if we did not have to annually renew our “Non-Catholic Religious Worker” card. So we decided to apply for Peruvian residency under these new immigration laws. The process begins with a visit to the Interpol office for fingerprinting and international background checks. Lately, Peru’s immigration agency has been overwhelmed by thousands of Venezuelans applying for asylum in Peru due to the chaos and violence in Venezuela. Like many other refugees in the world, they are immigrating to Peru with only what they can carry. Peruvians, and their immigration agency, are welcoming their northern neighbors while trying to meet their immediate needs. It was a sobering experience to be in line with these fellow immigrants, visiting and waiting together for our formal documents to give us all permission to belong.

As you can see, our lives are full of rich and unexpected events. We rejoice in this variety and in the opportunity to share some of it with you. We will be in the U.S. for itineration assignment from September to December. If you would like to learn more about our lives and work, please send us an email at sara.armstrong@pcusa.org or rusty.edmondson@pcusa.org.

Thank you for your support. We depend on your prayers and your giving to continue facilitating the work with our partners in Peru.

Create in us, O God, a desire to serve you and others, with hope for today and tomorrow. Amen.