Matthew 25 invitation fits ‘like a hand in a glove’

When the Rev. Kirk Perucca of Covenant Presbyterian Church in Kansas City, Missouri, heard the Rev. Dr. Diane Moffett, president and executive director of the Presbyterian Mission Agency, speak about the agency’s new Matthew 25 invitation, he got excited. 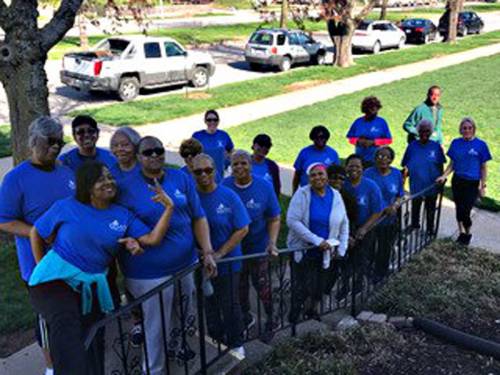 Covenant Presbyterian Church’s walking club, whose members have been traditionally underserved by the medical community, now have access to the church’s full-service wellness center and affordable health care. (Photo by Laura Hyland)

The invitation encourages congregations to become Matthew 25 churches by working on at least one of three goals — building congregational vitality, eradicating systemic poverty and dismantling racism.

Covenant, a predominately African American, multiracial, justice-centered, activist church, immediately said “yes” to the invitation, which was brought to the church’s Spiritual Life Committee the week before Holy Week.

Perucca says the nation’s biggest sin is still racism. Calling it “pervasive and deep,” he points to Kansas City’s most prominent and economic dividing line, Troost Avenue, as an example.

To the west, neighborhoods are predominantly white. To the east — where Covenant is located—neighborhoods are mostly African American. For decades, this racial divide has cut across all lines of education, health care, housing opportunities and jobs.

But in 2017, thanks to a gift from Second Presbyterian Church, which sits west of the Troost divide, Covenant opened a community health and wellness center. It’s gone from offering a few blood pressure checks to holding exercise and dieting classes and managing chronic conditions.

Those underserved by the medical community now have a full-service wellness center that provides affordable health care.

The church also co-sponsors the Project Equality Diversity and Inclusion Summit in Kansas City that addresses all forms of exclusion, alongside justice and wholeness. Perucca is president and CEO of Project Equality.

“We’re working on dismantling racism every day,” he said.

Perucca recently held two vigils for a young man who was killed while working at a convenience store next door to the church. One vigil was at the wellness center and the other was at the Southeast Kansas City Youth Prevention Coalition that’s working on alcohol, drug, suicide and violence issues in the neighborhood.

In the series, he told Second about the church’s history — how it started as an anti-slavery church in 1865 as an offshoot of First Presbyterian Church. Yet the current land deed, from 1915, stipulates that the church’s property could never be owned or transferred “to a Negro.”

“We have both succeeded and failed in our attempt to stay open and engaged to Kansas City’s changing demographics and racial issues,” Rock said.

That is why Perucca believes it is significant that PC(USA) churches on both sides of the Troost divide were coming together for worship on Thursday of Holy Week.

“It’s not just the symbolism of the meal,” he said. “It’s about people coming together and sharing a vision which has created hope along the divide.”

“One of the blessings of the Church,” he said, is that “through Christ we can bridge the divide.”

Lord, you make no distinction between rich and poor, between those who give bread and those who receive it. You know that they all need you, your love and your presence. Thank you for reminding us that we are all your children. Amen.