Nancy Wind, the leader of the new worshiping community Isaiah’s Table in Syracuse, New York, She recently partnered with the Matthew 25 Farm in Central New York. Its mission is to give away fresh vegetables and fruit to those in need in their neighborhood. 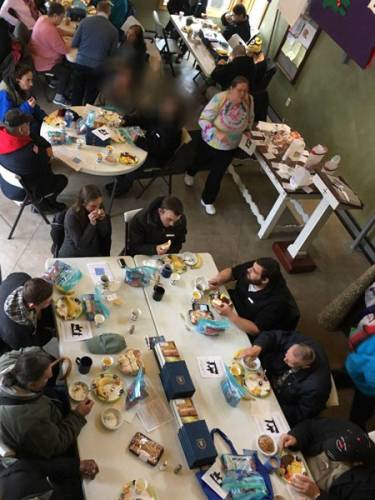 Isaiah’s Table lives into its mission ‘to provide grace, hope and food for all’ by serving breakfast to its neighbors each Saturday, followed by worship. (Contributed photo)

“Even though we’re not a PC(USA) church yet, it struck me that this is what we’re growing into,” said Wind.

Less than a year ago, Isaiah’s Table moved into the Westside neighborhood near downtown Syracuse. Leaving behind its food pantry at the former First Presbyterian Church, Isaiah’s Table’s main community event is still serving breakfast to community members, followed by worship. Worshipers also give away fresh produce in their neighborhood from the Matthew 25 Farm.

“This move really energized us,” says Wind. “The neighborhood is so much more vital, with a lot of community things going on around it.”

Wind recently met with the executive director of a peacemaking project in the Westside neighborhood that will be working on restorative and criminal justice reform.

Community members who have been in and out of jail come to Isaiah’s Table for their Saturday breakfast. Some stay for worship. One man who had been incarcerated for around eight months has come into a covenant relationship with Isaiah’s Table.

Recently, a couple they hadn’t seen in almost a year showed up — they’d finally found Isaiah’s Table’s new location. Wind said, “It was if the prodigal son had come to breakfast.”

The community was excited, Wind said, joyfully calling them by name and hugging them. “They were in tears,” she said. “They couldn’t believe we’d remembered their names.”

“The ministry of being involved with the same people coming with addictions — and in and out of prison — has made the suffering Christ more real to us,” she said.

Which is why when Wind took the community through a Holy Week service it ended in silence, with people thinking of those whom Isaiah’s Table has come to love.

“They’re not just statistics anymore,” she said, “or people that you can just walk away from.”

Merciful God, you have made us so we may cherish one another. Take the fear from our hearts so that all people may live in peace and justice. Amen.