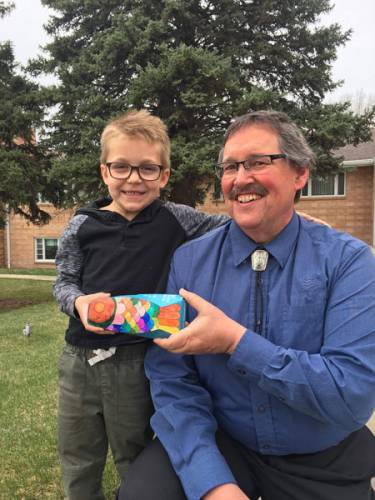 Paul Estes, 7, learned about One Great Hour of Sharing from his pastor, the Rev. Bruce McBurney. (Contributed photo)

Paul Estes, a first-grader from Torrington, Wyoming, looked forward to shedding his wiggly tooth and welcoming a visit from the tooth fairy.

Paul placed the money in his One Great Hour of sharing fish bank.

That gift joined the $140.14 that Paul already had in his fish bank. Paul spent weeks before the visit doing odd jobs to save money for One Great Hour of Sharing. Working for his family members and adult friends, Paul swept a driveway, emptied trash, cleaned the interior of a car, moved a pile of bricks to a more convenient location, cleaned baseboards, removed yard refuse and performed other chores. He was even commissioned to draw a picture and was given $5 for his efforts.

Paul, his parents, Mark and Erin, and his 4-year-old brother, Abel, attend First Wyoming United Presbyterian Church in Torrington. Paul said he decided to support One Great Hour of Sharing after he heard his pastor, the Rev. Bruce McBurney, talk about the Offering.

“My goal was to make $100,” Paul said. Thanks to supportive family and friends, he far exceeded his goal.

His parents suspect that One Great Hour of Sharing caught Paul’s attention when the congregation saw PowerPoint slides that illustrate what specific gifts will buy. For example, a $10 gift can purchase a set of farm tools for a family in a developing country, $40 can provide a piglet, and $25 can buy 10 jerry cans to help families transport water.

While the family drove home from church one Sunday, Paul declared that he wanted to earn some money to put in his fish bank. “It was 100 percent his idea,” Mark Estes said. “We didn’t prompt him. We didn’t lead him. He was just kind of musing to himself.”

Asked how much money he aspired to give, Paul announced his goal of $100.  Mark and Erin Estes then began talking with him about what types of jobs he could do and an hourly rate. They decided $5 per hour was a fair wage, and they started making a list of people who might have chores that Paul could do. Paul made the calls himself and stated his availability to work for One Great Hour of Sharing. As people said yes, Paul and his parents developed a work schedule.

One Great Hour of Sharing, now in its 70th year, has long been supported by Paul’s family. He and his brother are the fifth generation of his father’s family to attend First Wyoming United Presbyterian.

While Paul’s ambitious One Great Hour of Sharing venture was unexpected, his parents were not totally surprised that Paul was interested in helping others.

Mark and Erin say they teach their sons that money comes from work and that there are three things to do with money. “We spend some, we give some and we save some,” Mark said. “That is really a big emphasis in our family.”

While Mark and Erin purchase toys for their children, Erin said the family is more interested in providing them “experiences rather than physical objects that the novelty wears off of pretty quickly.”

Their dedication to simplicity extends to the house they are building themselves. They are working on a cob house made of clay, straw and sand.  Mark, a former teacher, is taking a hiatus from his woodworking business to devote his time to building the house. Erin teaches middle school math.

At First Wyoming United Presbyterian, the Estes family is active in various aspects of its ministry. “As a new pastor, I am blessed by their support and knowledge,” McBurney said.

Both Mark and Erin are elders and teach classes. McBurney described Paul and Abel as bright and fun children.

God, as you sow seeds within our hearts, let us also reap love throughout the world by supporting those who need our help and serving others as Jesus did. Amen.