The story begins with no transportation and no dry tennis shoes

It ends with the Holy Spirit accomplishing wonders

When talking about his work, Mark Hare knows how to capture your attention.

A mission co-worker in the Dominican Republic, Hare shared the details of his project with Mouvman Peyizan Papay (MPP), a grassroots organization in Haiti. At the heart of his story was the goal of introducing Community Health Evangelism (CHE) in the ecovillages built in Papaye, about 75 miles north of Port-au-Prince, Haiti.

“It began with a transportation problem: no truck, no motorcycle, no dry tennis shoes and the need to cross three rivers and a set of hills,” he said. “It ended with the realization that I was the hole that the Holy Spirit blew through, accomplishing wonders through the faithfulness of others.” 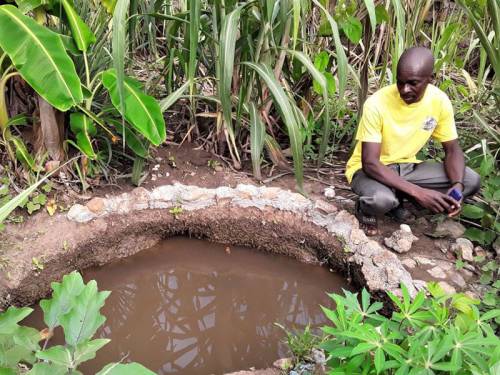 A resident of Ecovillage 3 proudly shows off his new fish pond in the middle of his vegetable garden. (Photo by Mark Hare).

MPP is a grassroots farmer organization and a partner of World Mission, the Presbyterian Hunger Program and Presbyterian Disaster Assistance, aimed at improving living conditions for farmers. MPP leaders were intrigued with the concept of CHE and requested that Hare and wife and mission co-worker, Jenny Bent, pilot CHE in the ecovillages, which are communities of refugees who choose to relocate to the countryside and re-establish their lives as farmers.

Together with the Dominican Evangelical Church (IED), Hare and Bent have worked in the Dominican Republic since 2016, introducing CHE there.

After workshops in January, where Hare and his Haitian CHE trainer, Eric Baptiste, presented the fundamental principles of CHE to MPP leadership and community leaders, the next step was to plan the first major training.

On Monday, May 20, Hare was in Papaye with a transportation problem. MPP’s old Toyota Land Cruiser was recovering from an incident with the driver’s side door. Herve Delisma, who sometimes provided transportation to Hare, had taken his motorcycle to a mechanic. And with the best of intentions, one of the young people in the home where Hare was staying had taken it upon himself to wash Hare’s tennis shoes, which were still soaking wet.

“No truck, no motorcycle and no tennis shoes. How was I going to get across three rivers and a set of hills to Ecovillage 1?” he said.

His partner and colleague, Baptiste, called at 10 that morning. He was already waiting in Ecovillage 1.

“I put on my Sunday shoes and in the early afternoon, Herve got his motorcycle running again. With my big duffel braced precariously on the motorcycle’s handlebars, we wound our way over the rivers and around the hills,” said Hare.

On Tuesday, the three were able to travel to five of the six ecovillages and reach agreement on June dates for conducting the workshop. This would allow the farmers time to get most of their crops planted. Public school would also be finished for the year, so the national school, Beganabe, would be the perfect location for participants to work, learn, eat and sleep during the five-day workshop.

On Wednesday afternoon, Hare, Baptiste and Delisma met with village representatives at Beganabe to confirm the ideas that they had collected the day before. By the end of the meeting, a newly organized committee had a date, a time and a place for their next meeting.

But the week wasn’t over. Thursday, Mulaire Michel, the project coordinator for MPP, collected Hare and Baptiste and traveled to Cape Haitian, about three hours north, where Hare and Baptiste introduced Mulaire to Baptiste’s boss, Osse St. Juste, director of the Medical Ambassadors of Haiti (MAH). During a face-to-face meeting, MPP and MAH agreed to work together to make maximum use of the available resources.

He spent Friday morning in the MPP office, turning in receipts and reviewing the budgets for the next four months. By Friday evening he had returned to Port-au-Prince for a meeting with colleague and fellow mission co-worker Cindy Corell. On Saturday afternoon, Bent picked him up at the Dominican border. They then returned home to their daughters, Keila and Annika.

“That’s my story of being in Haiti with no truck, no motorcycle and no dry tennis shoes. You may take a different lesson from it, but what comes to my mind as I share this story is that God works in wonderful, quirky ways,” Hare said.

Thank you, God, for speaking to us through others. May you give justice to the people of our world and may you use them to change us, in Jesus’ name. Amen.