Given the chance, these women and others are proving their mettle 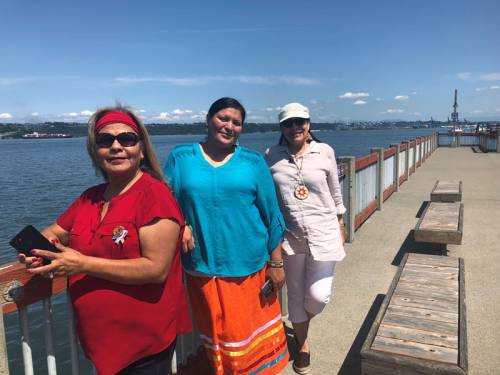 Women are playing increasingly pivotal roles at every level in the Presbyterian Church (U.S.A.). From moderators to heads of agencies, from stated clerks at the middle governing body level to synod and presbytery executives and pastors, women are at the forefront. And not to be excluded from this wave of women leadership are Native American women.

Since 2004, Fern Cloud, a member of the Sisseton Wahpeton OyateTribe on the Lake Traverse Reservation in northeastern South Dakota, has served as the commissioned ruling elder (CRE) at Pejuhutazizi Presbyterian Church, Upper Sioux Community in Granite Falls, Minnesota. She is among the first Native American women to lead a native congregation in Dakota Presbytery.

Cloud says her rise in leadership has been a journey. “Once they saw that I was committed, things begin to happen,” she said. “First they appointed me chairman of the Baltimore Dakota Presbytery Partnership, and that has been a while.” The partnership provides learning camps for the churches in the presbyteries. The summertime learning camps help Native youth retain information learned during the school term.

Cloud is actively engaged in the denomination in several leadership positions. She currently serves as stated clerk and treasurer of Dakota Presbytery, moderator of the Native American Consulting Committee and a member of the Racial Equality Advocacy Committee and is the former moderator of the Synod of Lakes and Prairies. She also works for the Upper Sioux Community as a tribal historic preservation officer.

As an artist and cultural consultant, Cloud does presentations and workshops on the Doctrine of Discovery, missing and murdered indigenous women, boarding school tragedy, U.S. government policies that affect Native Americans and Healing the Sacred Hoop.

“Women are stepping up more and being appreciated for what they bring to the table,” said Cloud. She says leadership roles in the Dakota Presbytery were primarily held by men. However, after doing a good job within the presbytery, she has held a lot of positions not normally held by women. “I’ve attended every General Assembly since 2006,” said Cloud. “It is important that Native American are represented at the table.”

Danielle Palomino is an emerging Native American leader. She grew up in the Church of the Indian Fellowship on the Puyallup Reservation in Washington state. As a fifth-generation Native and Presbyterian, Palomino said she was expected to be involved in her church as a youth.

“I attended Vacation Bible School, Sunday school and summer camp. It’s just what we did as youth in the church,” she said. “Then as an adult I dedicated myself to the church. I just thought that’s what you do to be a Presbyterian and to be a Christian.”

She most recently served on the committee that organized the Native American women’s gathering in Suquamish, Washington. “When we heard about the Presbyterian women, we jumped at the chance to get involved,” she said. “We wanted everyone included.  I was one of seven women who worked on the committee.”

Palomino teaches reading and math at a Native school and serves and an interventionist and paraeducator. “I’m still trying to figure out my undergrad program and where I want to go. I love education but I feel a calling to ministry,” she said. “I am trying to figure out a dual program where I can progress. It is taking me some time, but I will get there. I’ve always worked for tribes whether it’s my own Suquamish Tribe, or the Muckleshoot or Puyallup tribe. That’s been my calling, working within the tribes.”

Palomino says she also feels a call to bring her ministry to the community and to the reservations.

“I enjoy working with youth. They are our future leaders,” she said.

At the gathering, Palomino, along with Gina Enos, were voted co-moderators of the Native American Presbyterian Women beginning in 2021.

Creator God, thank you for lifting us from shadows of darkness to lives of love, joy and peace through your Son, Jesus Christ. Guide your people as we share the gospel with those in need of you. Grant us your peace. Amen.