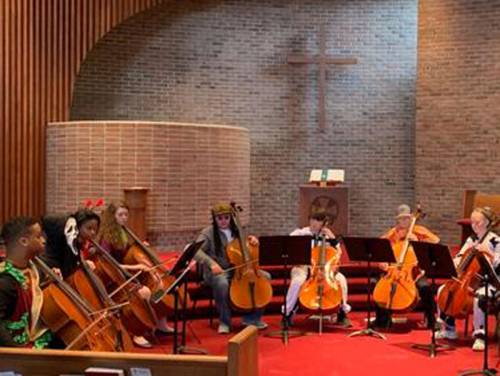 Glasgow (Kentucky) Presbyterian String Academy was born, says the church’s transitional minister, the Rev. Charlie Evans, because the church paid attention to what God was saying.

First Presbyterian Church’s string academy “is enacting Jesus’ command to ‘love God and love neighbor,’” said the Rev. John Odom, Mid-Kentucky’s Presbyter for Community Life, “and the congregation, the community and the presbytery are being blessed as this life-giving congregation is helping to transform their little part of the world.”

In order to succeed, the musicians must rely on themselves as well as each other, their instructor said.

Since the academy’s beginning, “I have seen tremendous growth in the students in every way,” Thomas said. “Of course, they are advancing technically on their respective instruments. But more importantly they are fostering their gifts that they have been blessed with, while building character.”

“Playing any instrument (but especially those belonging to the violin family) is challenging, and requires dedication and focus,” said Thomas, the academy instructor. “Along with that comes self-responsibility, which some students may not have had to assume previously. … For me, my goal is not for my students to become professional musicians, but rather to be more sensitive, compassionate and intellectual human beings. If I have achieved this and the students are happy, then I have met that goal. I am overjoyed by the growth of the students at First Presbyterian String Academy, and I look forward to watching the program continue to grow.”