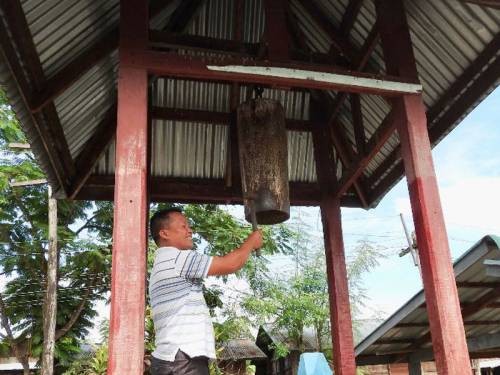 The Rev. Lal Lian Puia rings the Kanan Church bell, which was made from a defective bomb dropped by the Japanese Air Force during World War II. (Photo by Bill Moore)

Japan Mission, a PC(USA) mission partner, operates a large general hospital in Osaka. Our efforts have especially supported the PCM’s Agape Hospital in the city of Kalay, in west central Myanmar. Each time we visit Kalay, we are amazed at the changes that have taken place. New construction is booming and there are many more vehicles on the roads than there have been in the past. The population is increasing due to migration, much of which is from the Chin Hills to the west.

As we had not yet ventured much beyond the confines of Kalay, we asked our host, the Rev. Ram Thanga, general secretary of the PCM, to guide us into the Chin Hills where many churches of the denomination are located. Early in the morning, we set off in a four-wheel drive vehicle up into the hills, soon discovering they are not hills at all, but very high and steep mountains. Mount Victoria, the tallest mountain in the Chin Hills, rises to 10,500 feet, and other peaks are not far behind.

Quite surprising were the many houses and shops that clung to the mountainsides on stilts, and the fields for farming that were more vertical than horizontal. However, most gratifying was the number of churches we saw. In each small settlement, there was at least one church, and in villages and towns, there were many more. We learned from our host that more than 90% of the people in the Chin Hills are Christian.

Our destination was a town called Tadim, where there is a church and synod office of the Presbyterian Church of Myanmar. Upon arrival, we were warmly greeted by the synod and elders of the Tadim Church. After giving greetings from Japan Mission and the PC(USA), we were treated to a delicious meal, catered by an elder’s restaurant. They showed us their worship space and explained how it was too small to accommodate their growing congregation. Then they led us up steps to the adjacent reinforced concrete skeleton of the new sanctuary. The congregation had given all that they had to build the church, and, in expectant faith, they believe in God’s time the new sanctuary will be completed.

Before we left, we asked for some help from the elders. Because most households in Myanmar cook their meals over open wood fires, over time the smoke causes serious respiratory and vision problems. This way of cooking also contributes to air pollution and deforestation. In addition, gathering firewood takes a lot of time, and, if purchased rather than gathered, is very expensive.

To address these issues, a new wood burner has been invented. We brought one of these with us so members of the Chin Hills congregation can test it over time to see how it holds up. The heat from the burner’s fire generates electricity to power a small fan that concentrates the flow of air into the burner. The fire is hotter, 90% cleaner and uses half the wood as compared to the open-fire stove.

The next day, we went to meet a pastor who recently participated in a Japan Mission-sponsored gathering of young pastors from Myanmar, Korea, Japan, Taiwan and Thailand. The Rev. Lal Lian Puia’s congregation is part of a beautiful church compound, with a manse and kindergarten program.

After lunch, the pastor showed us the church’s bell. It was a strange looking oblong bell struck every Sunday with a hammer to summon congregants to services. I asked him how the church had acquired such a uniquely shaped bell, and he said with a grin that it was half of an iron bomb casing scrounged from a defective bomb dropped by the Japanese Air Force during World War II. A tool of death and dreadful destruction had been turned into a sacred object, joyfully calling God’s people to worship. We were moved.

We are blessed to be in partnership with the Presbyterian Church of Myanmar. Their faith both humbles and strengthens our own.

Lord, continue to call us to enter into life-changing partnerships with your children throughout the world. In the powerful name of Jesus Christ, we pray. Amen.