Let’s have dinner and talk about death 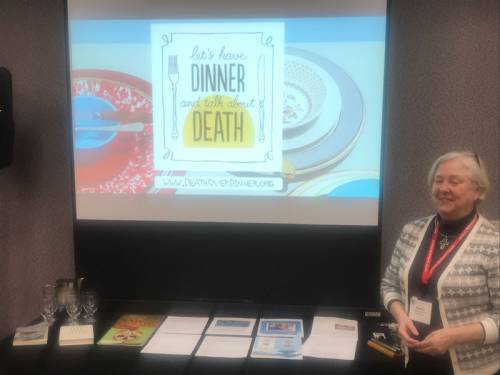 The Rev. Roberta Dodds Ingersoll used her experience hosting dinners to help churchgoers talk about death in a comfortable setting during a workshop at the national gathering of the Association of Presbyterian Church Educators. (Photo by Mike Ferguson)

Now retired after serving First Presbyterian Church of Libertyville, Illinois, the Rev. Roberta Dodds Ingersoll described during a recent workshop how congregants at First Church became more comfortable talking about their death, or that of a loved one.

Here’s her secret: using prompts and ideas from the website deathoverdinner.org, Ingersoll and other church leaders scheduled what would become nearly 20 dinners where people discuss, over three courses of a home-cooked meal, how they formed ideas about death; how they might design their own funeral, wake or memorial service; and how they would support the end-of-life wishes of people they love and care about. They also talked about how they wanted their own life to end.

Ingersoll called her workshop, offered during the annual gathering of the Association of Presbyterian Church Educators, “Let’s Have Dinner and Talk About Death.”

“This is about process and a model for talking about death,” she said.

The workshop opened with an exercise many participants found moving, one that was part of each of the dinners as well. With workshop participants seated around round tables, each was asked to raise a glass of water and share a toast for a deceased loved one.

Each of the three courses begins with a question. Here’s the salad course question: How old were you when you first realized you were going to die? What was that like for you?

Ingersoll, a longtime pastor and educator, thoughtfully provided a box of tissues at each table. One by one around the table, workshop participants answered the same questions that dinner guests had answered previously.

The main course question asked guests to design their funeral, wake or memorial service. Over dessert, dinner guests are asked how they would support the end-of-life wishes of those they love. How would they want their own life to end?

“I didn’t hear a lot of pauses in the conversation,” Ingersoll said after participants finished answering the three prompts. “It’s a topic people want to talk about. Dinners are a way to talk about feelings and experiences.”

“You can be successful with eight or 80 people,” she said. “It’s not a burden, friends. It’s a joy to share that with your family members.”

“Life is a story. What does yours say?” she said. “Folks need to know your history.”

First Presbyterian Church leaders followed up the dinners with a churchwide seminar put on by service providers including attorneys, hospice workers, funeral directors and caregivers. Many donated their time to meet with church members who had attended one of the dinners.

Each life you create, O God, is light for all. Each one possesses seeds of overwhelming greatness and goodness to nourish a starving world. In our lives and churches, may the light be honored. May the seeds be nourished and may the fruits of greatness and goodness fill the earth. In the Light of Christ, we pray. Amen.