Out of three, one 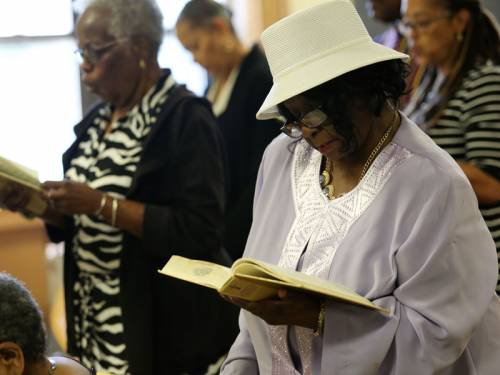 The West Philadelphia Presbyterian Partnership is a blend of three former congregations in the Presbytery of Philadelphia. Worship takes place in a community center. (Photo by Erin Dunigan)

Three churches in the Presbytery of Philadelphia were at a crossroads — each considering their future for different reasons.

“This has been such a crazy non-linear journey,” Santana-Grace said. “Every time we took a step forward, it was clear that God was blessing it.”

Several ago, Santana-Grace and Porter began meeting with the session of First African Presbyterian Church to determine how this community of saints, faithful but struggling with attendance and finances, might enter into a new season. First African is the first black Presbyterian congregation in the United States.

At the same time, an administrative commission had been appointed to consider the future of Calvin Presbyterian Church.

And not long after that, Good Shepherd Presbyterian Church experienced a fire that took its physical church building and left the remaining dozen or so members of the congregation wondering what might be next.

By 2017, it became apparent to those involved with the three congregations that there might be something new emerging. The presbytery earmarked funds to move this potential new ministry forward.

A new administrative commission formed in early 2018 to come alongside this “new thing” that seemed to be unfolding. After about 18 months of monthly gatherings with the sessions, they voted to hold a joint service the first Sunday of Advent in 2018, followed by a town hall meeting to present plans for moving forward as one worshiping community in early January 2019.

The West Philadelphia Presbyterian Partnership was officially given form.

“We got to the point in the journey where we understood we needed a leader, someone with special gifts,” Santana-Grace said. “Someone who was system savvy, a gifted proclaimer of the Word, someone who exhibited grace, honored history, but also dreamt about new ways of being and could bring divergent styles together.”

That leader was unanimously chosen. 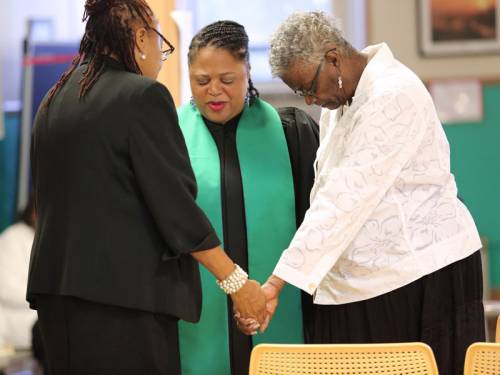 The Rev. Eustacia Moffett Marshall calls the ministry of the West Philadelphia Presbyterian Partnership “divine transformation that is happening at the core of our souls.” (Photo by Erin Dunigan)

On July 21, the new designated pastor, the Rev. Eustacia Moffett Marshall, preached her first sermon to the combined worship gathering.

Marshall grew up in Oakland, California, a city geographically far from Philadelphia but in many ways quite similar. She attended church in West Oakland, where her mother, the Rev. Dr. Diane Moffett, now president and chief executive of the Presbyterian Mission Agency, served as the pastor.

She had also served as a full-time minister of music, received her real estate license, and was in a doctoral program studying leadership. Additionally, she has chaired the Board of Trustees for the Presbyterian Foundation since 2018.

“I had all these things I was doing, these passions I was following that might seem randomly placed,” she said. “But when I learned about this initiative and what was being sought, I realized that all these unique experiences were exactly what was needed.”

In many ways, this new partnership, as well as Marshall herself, are beginning a new phase of life together.

“This project is about entering into a new season of life for these three congregations that have come together to become one and in so doing to connect to the community at large,” she said. “It is exciting work.”

The partnership is currently meeting for worship in a rented community center. The hope is to build something of their own one day.

“I see us not only as hosts for the community, to be a space where the community can gather, but also guests in a community that already has a sense of what it needs,” she said. “It is exciting work, divine work — it is divine transformation that is happening at the core of our souls.”

Lord, we give you thanks for ideas shared, ministries birthed and communities developed by which we may participate in your kingdom’s work and experience bearing fruit and growing in our knowledge of you. Amen.