A rising tide of urgency 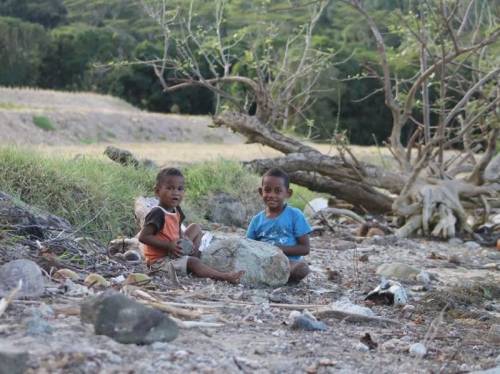 Children in the village of Narikoso, Fiji, where the ocean had forced villagers to relocate. (Photo courtesy of the Pacific Conference of Churches)

When discussing the issue of forced migration, we see images in the U.S. of violence and economic inequality in Central America, South America and parts of the Middle East.

But in Asia and the Pacific, the Rev. James Bhagwan, general secretary of the Pacific Conference of Churches, said some areas are facing the extinction of entire cultures by rising sea levels, increasing ocean temperatures and extreme weather.

The Pacific Conference of Churches, a PC(USA) global partner, follows the mandate to speak truth to power on issues of justice. One of the most impactful is caring for God’s Creation.

“The sense of justice, the sense of providing sacred space, safe space, hospitality and helping people to be accompanied in that journey, where they are actually for the first time having to uproot themselves from generations of embedment in the land and the sea and come to somewhere else,” Bhagwan said.

More than 2,000 languages are spoken in the Pacific and on an atlas, the islands look like tiny dots spread across the page. That presents its own challenges.

“We understand the ocean does not separate us,” Bhagwan said. “It’s what connects us. So, we recognize that the ocean is our home and part of who we are, part of our identity.”

Pacific island nations are located in the Pacific Ocean, east of both Australia and the Philippines, as far west as Papua New Guinea, and as far east as Easter Island. The region is also referred to as Oceania — which also includes the Australian continent.

These people being forced from their homes are often referred to as climate refugees, environmental refugees or climate change migrants.

Natural disasters like droughts, bushfires and cyclones have become increasingly common in the Pacific island nations and many other countries as well. According to a report by the Intergovernmental Panel on Climate Change (IPCC) released at the U.N. Climate Change Conference in Paris, if the sea continues to rise at its current rate, some islands will be completely under water by 2050.

Because of excessive carbon emissions, the world’s oceans are absorbing the extra heat in the atmosphere, but the effects are far beyond just rising waters. Pacific islanders are watching many types of marine life struggle and often die trying to adapt to the warmer water. This struggle has devastated coral reefs and fishing, resources that many depend on for their livelihood. The warmer waters are also causing storms around the world to be more intense.

At an international climate conference, former Kiribati President Anote Tong said his nation, with a population of about 105,000 people in the central Pacific, could be completely submerged in the next 50 years. Kiribati is a sovereign state in Micronesia made up of more than 30 islands. However, the current president, Taneti Maamau, believes that while climate change is real it is not man-made, so his administration has put aside the pessimistic image of a sinking nation and is focusing on building luxury resorts and attracting investors.

In Fiji, a haven for tourists for its natural beauty, coastal homes are flooding at high tide and the island’s sugar cane is being destroyed by the sea water. The Marshall Islands declared a state of emergency in 2013 after a crippling drought that caused water shortages and crop damage. A year later, the islands were hit by a massive high tide that caused hundreds to evacuate.

In May 2019, the Pacific Conference of Churches hosted its third Climate Action Pacific Partnership Conference in Fiji. The consultation involved 45–50 people, most of whom were from Pacific island countries.

Although the crisis is critical, the Pacific Conference of Churches hopes it can have a realistic impact. “If we cannot be brothers and sisters to the fish, the land and the air, at least let’s be good neighbors,” Bhagwan said.

Lord, we give thanks for all of Creation. We ask for forgiveness when we live in ways that diminish the significance of your Creation as we absolve ourselves of responsibility. Remind us that you call us as caregivers, not simply consumers. Give us disciple hearts and thoughtful minds. In Jesus’ name. Amen.