Serving those who have nowhere else to go

Helping others begins with identifying with them 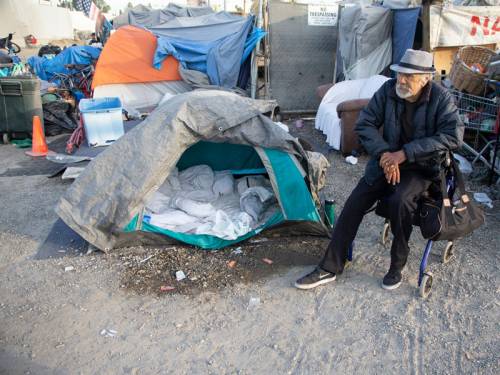 More than 60,000 people in Los Angeles are experiencing homelessness. About two-thirds live on the streets or at an encampment like this one. (Photo by Mike Fitzer/Film 180)

According to the Rev. Billy Song of St. Mark’s Presbyterian Church in Lomita, California, Los Angeles County has about 60,000 people experiencing homelessness. About two-thirds are living on the streets or in tents.

Nancy Salinger, a member of St. Mark’s Homeless Encampment Ministry, said she found him at the homeless camp about 10 minutes from the church and started bringing him food.

Adams worked closely with one of the encampment residents, Heidi Strobel, helping her to apply for rent assistance. That help paid off: Strobel recently moved into a studio apartment in Los Angeles about 10 miles from the encampment. Most of the $1,200 monthly rent for her apartment is paid through a government subsidy housing program.

Together they want to make sure that the women who were formerly experiencing homelessness and are living away from close friends and family won’t feel alone or isolated. This, too, is part of the work of alleviating poverty.

Hearing people’s cries for help made Sundberg think about Jesus’ Parable of the Good Samaritan and how people saw a person hurting and walked away — and how she used to be that way.

But now she is part of why St. Mark’s Presbyterian Church is one of what is now more than 350 PC(USA) Matthew 25 congregations. Along with 31 mid councils, all, including St. Mark’s, are working on at least one of these three priorities — building congregational vitality, dismantling structural racism and eradicating systemic poverty. Because everyone at the encampment is concerned with issues of food, drink, shelter and health, Wilde calls the St. Mark’s homeless encampment ministry “a Matthew 25 effort all by itself.”

“Can it happen? I think If enough people care,” she said. “It’d be a very challenging task, but we’ve got someone up there on our side. How could it not?”

Gracious God, we thank you for those who minister to the poor, the dispirited and all in need of your healing power. May we all strive to spread Jesus’ love and compassion far and wide as we go about our daily lives. Amen.