Ebun James-DeKam to visit U.S. churches and institutions in the fall 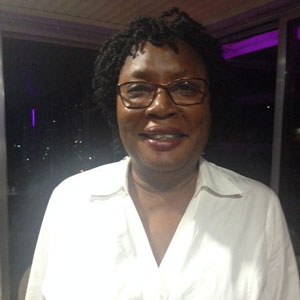 U.S. churches, presbyteries and educational institutions have the opportunity to hear firsthand accounts of the struggles facing West Africa this fall. Ebun James-DeKam, general secretary of the Council of Churches in Sierra Leone (CCSL), is among 16 International Peacemakers who will be traveling across the country between Sept. 22 and Oct. 16.

James-DeKam is the first woman to serve as general secretary with the council and has helped the people of Sierra Leone recover from years of civil war, famine and the recent Ebola outbreak.

“Sierra Leone ranks very low in virtually all development indicators identified by the United Nations,” she said. “Currently, 75 percent of the population is living at or below the poverty level. Infant and maternal mortality rates are high, literacy rates are low and unemployment and underemployment are high. Sierra Leone is not self-sufficient in its staple food, rice, and our currency is devaluing against major hard currencies.”

In 2014 and 2015, the CCSL was heavily engaged in dealing with the Ebola virus outbreak as well as other challenges facing the country.

“The health sector completely collapsed during the Ebola outbreak and remains overburdened and underfunded and understaffed,” James-DeKam said. “We are supporting approximately 100 vulnerable girls to continue their primary and secondary education as well as 40 Ebola youth survivors and Ebola widows.”

James-DeKam says the long-term goal is for the country to attain economic self- sufficiency and she commends the Presbyterian Church (U.S.A.) for its assistance during the civil war and post-Ebola activity. She says compassion-fatigue training has been a huge help to pastors, other church leaders and pastors’ spouses.

“Many of these pastors and their spouses minister to their congregations and communities 24/7 trying to address congregational and community needs. This initiative has reached approximately 200 leaders,” she said. “The general consensus has been very positive and provided a significant help to those involved.”

James-DeKam also credits the PC(USA) with helping launch the West Africa Initiative (WAI), a food security program working to make communities self-sufficient in food production and income. “During the decade of civil war, the church provided much relief and rehabilitation assistance to thousands of families nationwide, including seeds and tools, rebuilding schools and medical clinics.”

The Council of Churches in Sierra Leone was organized in 1924 under the name of the United Christian Council. Its initial goal was to promote fellowship among churches and to assist churches in education and medical mission outreach. Civil war prompted the CCSL to widen its focus and direction.

“Currently, I am challenged with changing the mindset of the council and trying to enable and empower churches to be more engaged in programming while CCSL plays a stronger facilitation and training role,” James-DeKam said. “This involves building and strengthening the concept of ownership of the organization as evidenced by increased support of and engagement in programs that can benefit all member denominations of the council.”

The deadline to complete an application to host a peacemaker was July 1, but applications are still being accepted if individual peacemakers have the availability on their calendar. James-DeKam does still have availability. To apply to host her or another Peacemaker, visit the International Peacemaker page.

Since 1984, more than 300 International Peacemakers from 57 countries have been hosted by 160 Presbyterian mid councils, colleges and theological institutions. Click here for more information.

The Presbyterian Peacemaking Program is made possible by gifts to the Peace & Global Witness Offering.

Almighty God, open our eyes and hearts that we may know you in our daily bread — both as we receive it from your hand and as we pass it on. Amen.