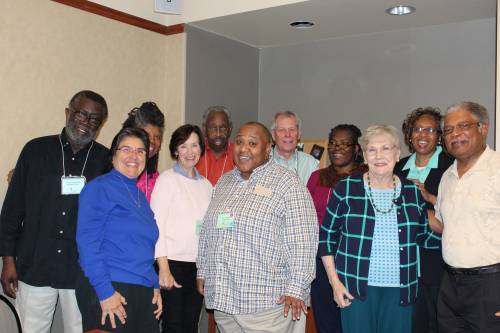 The Presbyterian Committee on the Self-Development of People has a long list of volunteers who champion the ministry’s mission. For the Rev. Johnny Monroe, it’s been a lifelong commitment.

“I guess I’m what you would call a cradle Presbyterian. I was born into Presbyterianism,” he said. “Back in the late 1800s after slavery, missionaries from the northern church established schools and churches in Sumter County, South Carolina, including the Goodwill Presbyterian Church and Goodwill Parochial School, where I grew up.”

Monroe serves on SDOP’s national committee and was introduced to the ministry at its inception in the 1960s during the civil rights era. Ordained into the ministry in 1966, the retired pastor has served churches in Rochester, Kansas City and Philadelphia, to name a few. Although he has served in a number of capacities within the church, Monroe says he found his niche by working with SDOP.

“The church took the steps to come along beside people who were hurting, working with the community of need and empowering them to help themselves. The church wasn’t giving a handout but a hand up, helping people get started,” said Monroe. “When I saw the church moving in response to a black economic development group and working to provide funds to help a community in need, that’s what attracted me to SDOP.”

In its roughly 50-year history, SDOP has provided support for more than 5,600 community projects in 67 countries, including the U.S.

The Rev. Alonzo Johnson, SDOP coordinator, says Monroe has been a valued member of the national committee and provides keen insight into the needs of communities.

“Rev. Monroe brings years of great wisdom to SDOP. We are blessed to have such an influential luminary as part of our ministry,” said Johnson. “As an African-American Presbyterian, I am honored to be able to partake in the work of SDOP with a legend who has influenced and inspired many in doing committed and engaged urban ministry.”

Through the years, Monroe says, he’s witnessed community groups learn to stand on their own and build futures for families seeking to take control of their lives. He says a few projects have stood out.

“Serving on the committee, we have funded taxi groups in Philly that were getting shafted, helping the drivers organize themselves so they could speak for themselves,” he said. “I think of groups out of New York City, gardening projects in Philadelphia and Pittsburgh. We funded a group of women who organized and trained themselves and have become entrepreneurs. Those really stand out with me.”

Monroe says he will continue working with SDOP as long as he can and believes better days are ahead for both the ministry and the people it serves.

“I believe SDOP is the fourth leg of a stool — the righteous and prophetic arm of the church,” said Monroe. “It is that ministry within the church that can talk about evangelism, social justice and social witness at the same time.”

God, grant us peace to rest in you, love to connect with our neighbors and courage to venture out. Amen.