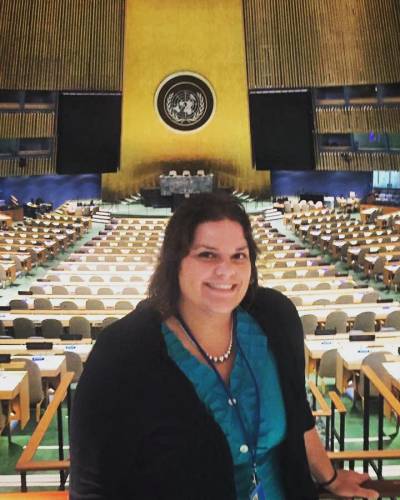 Like many high school graduates, Mindy Vande Brake was searching for purpose in her life. The St. Cloud, Minnesota, native went to college close to home, but couldn’t settle on a major that she found exciting. She decided to get some work experience and found herself in the restaurant industry.

“I liked the work, but I was looking for something more and realized God was calling me in a different way,” she said. “I had a few opportunities, including a Presbyterian Peace Fellowship, that allowed me to go to Israel/Palestine and see up close what was going on there.”

During her visit to the Holy Land, Vande Brake visited a refugee camp in Bethlehem, which she says made her question what the United Nations was doing as it related to Palestinians.

Several of her travel companions had served as Young Adult Volunteers (YAVs) with the Presbyterian Church (U.S.A.), and she says they were instrumental in her decision to apply.

“After I was accepted, I turned it down because I was promoted at my job. But even after that, I regretted not doing it,” she said. “When the opportunity arose again, I decided to pursue it.”

The YAV program allows Presbyterians to serve a faith-based year, either in the U.S. or internationally. YAVs partner with agencies working to address poverty or social justice issues.

Vande Brake chose to extend her YAV experience for a two-year term. The first year was spent in New Orleans. During the second year, she chose to work for the Presbyterian Ministry at the United Nations.

“I mostly attended meetings on every kind of issue, from women’s rights and refugee migration to peace building, the conflict in Syria, Congo and South Sudan, to name a few,” she said. “A lot of the work was connecting the U.N. work with Presbyterian policies, and this allowed me to see it through the church’s eyes.”

Vande Brake sat in general U.N. sessions, next to ambassadors, mission staff and others.

“I really enjoyed the Commission on the Status of Women. We brought in 20 delegates from across the U.S. Thousands of women from across the world came to the U.N. headquarters in New York,” she said. “There were so many meetings on all types of issues relating to women. The room was full of diversity and amazing women. It was a wonderful opportunity to hear their stories and learn what they were doing in their homelands.”

Ryan Smith, director of the Presbyterian Ministry at the U.N., found Vande Brake to be a valuable asset to the work in New York.

“As a second-year YAV, Mindy was able to take the information she learned from providing services her first year to advocating for social change within the international community in her second year,” he said. “It’s both service and social change that make the PC(USA) important for the world.”

As she prepared to head back to Minnesota, having completed her term, Vande Brake said she would cherish the time she spent with the U.N. ministry.

“It has opened my eyes to human rights issues across the world and allowed me to see how other countries are suffering more than us,” she said. “I am hoping to go back to school in January and study international relations and political science. My goal is to one day work on the ground in peacemaking for another country.”

“It was a pleasure having Mindy bring her skills of patience and hospitality to the U.N. ministry,” Smith said. “From helping to move the office, advocating for the Commission on the Status of Women, to working with local congregations, Mindy brought a passion and energy to her work that demonstrates why Presbyterians should be encouraged by emerging leaders.”

Smith says the YAV program changes young adults both professionally and personally and is proud that the ministry at the U.N. is a partner.

“It’s a once-in-a-lifetime experience. I would never have had the opportunity had I not participated as a YAV,” said Vande Brake. “Sitting at the U.N. table next to ambassadors and participating in the conversations is something you can’t get anywhere else.”

God, thank you for your Spirit that flows from generation to generation and is always at work in us. Amen.