The faith of Maria Fearing, a slave freed to serve

In God’s mission, we show our faith by our obedient service. In other words, as Francis of Assisi is believed to have said, “Preach the gospel at all times; when necessary, use words.” This is the task and mission of disciples of Jesus — to let our lives speak for themselves of the gospel, and if necessary to use words to enhance and amplify our faith.

Presbyterian mission personnel face challenges around the world where actions are more needed than words. 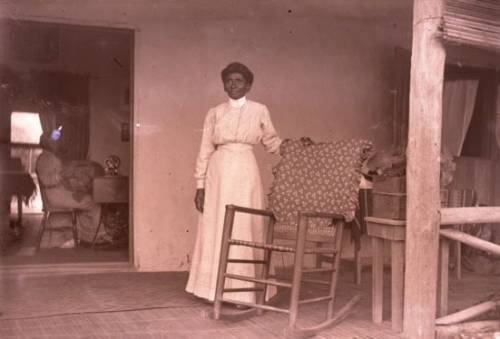 Maria Fearing at the first Congo mission station in the city of Luebo. (Photo courtesy of the Presbyterian Historical Society)

Speaking about stories of faith and witness — where actions speak louder than words — I am reminded of the story of Maria Fearing, born into slavery near Gainesville, Alabama, in 1838. Her biography, The Maria Fearing Story, written by Darius L. and Vera Poe Swann, begins with Maria, a black slave girl, listening to her white owner tell of little African children who had never heard of Jesus. “I will go to Africa someday if I can,” Maria said.

In 1865, Maria became a free woman. She learned to read and write at age 33, and went on to become a successful teacher in Anniston, Alabama, after graduating from the Freedmen’s Bureau school in Talladega. Despite her “old age of 56,” she sold her home and traveled with the Rev. Dr. William Henry Sheppard to Africa in 1894 as a Presbyterian missionary. She worked in the Congo as a teacher and Bible translator for 20 years, and also bought many people out of slavery in the Congo. Her most famous achievement was the establishment of the Pantops Home for Girls in Luebo, Congo. She was known as “Mother from far away.” Despite the church’s skepticism, Maria outlasted many of her colleagues in Africa, retiring from missionary service in 1915 due to age restrictions. She taught school in Selma, Alabama, until her death in 1937 at the age of 99. Her story was introduced in Alabama history textbooks during the turbulent days of the 1960s. She was inducted into the Alabama Women’s Hall of Fame in 2000.

When we talk about the mission movement in Africa, we typically mention the name of the Rev. Dr. William Henry Sheppard first, and sometimes mention the name of Maria Fearing as another great African-American mission worker. Maybe it’s time to correct the order and put her name in first place.

Maria had to overcome the racism of white society, the discriminatory treatment of the church for her age and society’s bias against women. She had an “uphill” path to proclaim the gospel to the African children she felt called to serve when she was a little salve girl. But she finally did it, and did it well.

Reading her story I was deeply moved in my heart to sing, “We shall overcome.”

Gracious God, we lift before you our African brothers and sisters. Bless their witness in some of the most challenging contexts in the world. Help us to be ready to receive the precious gifts of their faith, their skills and their wisdom and to partner more faithfully with them, so that the entire world may know of your love. We pray in the name of Jesus Christ, our living Savior. Amen.