Nearly all its children have dangerously high lead levels 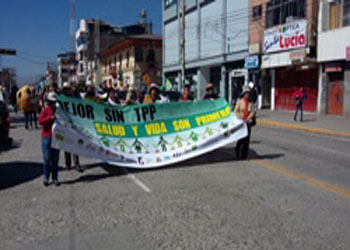 In a march organized by Joining Hands Peru (“Red Uniendo Manos Peru”), residents of La Oroya protest the Trans-Pacific Partnership, a trade agreement that aims to provide greater rights to foreign investors, thus potentially allowing them to avoid their environmental responsibilities by suing the countries in which they operate in a foreign tribunal if they disagree with regulations. (Photo by Jed Hawkes Koball)

La Oroya is considered one of the 10 most contaminated cities in the world; nearly all its children have lead poisoning due to toxic emissions from a metal smelter owned by Renco Group Inc., a U.S.-based holding company. Claiming that Peru’s government unfairly enforced strict and costly environmental regulations, the smelter filed bankruptcy in 2009 and has not been fully operative for seven years.

Responding to the clamors of Peru’s mining industry, which claims it can increase profits and stimulate the economy if able to export a refined product, Kuczynski said in July that his administration would make reopening La Oroya’s smelter a top priority. He called for weakening emissions standards in order to do so, however. Fifteen years of progress are now threatened by the slimmest of electoral margins.

We now face a new struggle in furthering our progress in securing specialized health care for people contaminated by heavy metals, in holding the government accountable for the remediation of land and water and in implementing stronger environmental regulations regionally.

This struggle is exacerbated by a free trade agreement that allows foreign investors like Renco Group to sue the government when it believes its profits are threatened. This is exactly what Renco Group did, filing a lawsuit for $800 million in an international tribunal that alleges that Peru´s environmental obligations were unfair and led to the smelter’s bankruptcy. The case was recently dismissed on jurisdictional technicalities but will soon be filed again, potentially holding up justice in La Oroya for another five years or more. And with our efforts to secure better environmental laws, more such lawsuits are expected.

Yet our partners have hope! They hold tight to the biblical mandate to ¨Speak out, judge righteously, defend the rights of the poor and needy” (Prov. 31:9). Our partners are taking it to the streets to dialogue with local and national legislators, educate the people and build an international movement. Presbyterians in the U.S. stand side-by-side with our partners in Peru in this long battle for justice. We join in their demand that the health of the people and the home we all share in God’s creation, rather than the potential profits of investors, be a top priority—not just for Peru, but for all nations. “Speak out!” The command from Proverbs is unrelenting. Your voice is needed now. Will you join us?

Good and Gracious God, help us be faithful with the good news you have entrusted us to proclaim. Guide us in bringing good news to the poor. Inspire us to real and practical service to the least of Christ’s brothers and sisters that we might minister to each according to their genuine needs in name Jesus Christ. Amen.