Proves to be an effective conversation starter 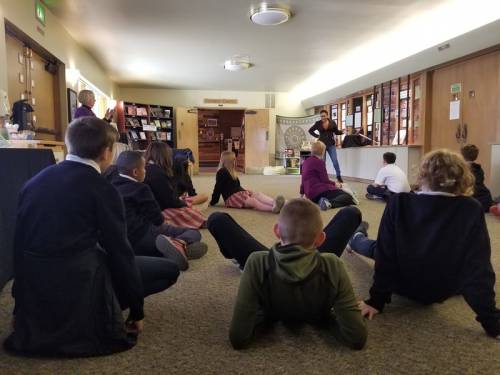 Jackie Muchiri and her son Jordan, members of Lake Burien Presbyterian Church in Burien, Washington, were facing an uncertain future after receiving an eviction notice due to the sale of her apartment building. For the church’s leadership, Muchiri’s situation was one more reminder that the congregation needed to be at the forefront for a change in policies in its community.

The epiphany has resulted in Lake Burien Presbyterian becoming known as a place where conversations surrounding injustices like rental housing abuses can happen. It is also becoming known as the church in the greater Seattle area where tackling larger issues, such as unfair practices, injustices and racism, is encouraged.

The Rev. Tali Hairston, one of the worshiping pastors at Lake Burien, credits senior pastor the Rev. Lina Thompson for the direction the church has taken.

“We’ve had real hard conversations. We’ve developed a Justice League group, which is a group of folks who are white, black, Asian, Pacific Islander and Hispanic who just want to understand how God sees the world outside of racism and white supremacy,” Hairston said. “It’s a big step for many in the congregation, but we are continuing to learn how to live the gospel faithfully.”

The training, held over the course of six months, built awareness about historic racism. It culminated in a trip last summer that included stops in Montgomery, Alabama; Memphis, Tennessee; and Ferguson, Missouri — and focused on the civil rights movement and the voices of African American women.

Hairston said that there were “messy, hard, ugly, beautiful, anointed and holy” moments for everyone on the trip.

Upon returning to Lake Burien, the group knew it needed to unpack what it had experienced. It did so by creating an exhibit called “In Our Shoes.”

Located in the entryway of the church, the exhibit ran from September to October and traced the history of African American life in America from the middle passage and enslavement till today. It is estimated that more than 800 people, including people from the neighborhood, community organizations and schools, have experienced “In Our Shoes.”

“We did it as a part of our own journey to continue our own healing as a congregation, both individually and corporately, and to bring those from our community into the conversation,” Hairston said, adding that Seattle and its neighboring communities are a lot like other regions in the United States in that the condition of African American communities, graduation rates, housing and wealth disparity are everyday problems that many times go unnoticed.

These injustices have not gone unnoticed by the Seattle Presbytery, Hairston says, and the presbytery is taking steps to address these situations.

A study is underway that focuses on the communities that surround churches and the health of those churches. The data is being compared to that of other Presbyterian Church (U.S.A.) congregations as well as other denominations.

“Some of the things we’re finding is that both the shifts in demographics and shifts in culture are particularly acute for Presbyterian congregations,” Hairston, who doubles as the presbytery’s director of community organizing, advocacy and development, said of the preliminary findings. “And we need to find out why that is. A place like Seattle is technologically innovative but yet the church itself is struggling to innovate with changes in demographics and culture.”

Seattle Presbytery is also doing an assessment of its congregations so a strategy can be put in place to combat issues of equity and inclusion that are affecting the churches.

As for Lake Burien Presbyterian, Hairston said the congregation will continue being a place where tough conversations can take place.

“The door is open for us to continue to be the kind of congregation that just doesn’t meet on Sunday,” he said. “We’ve seen people who didn’t want to talk about issues of race, who didn’t know how to talk about issues of race, become involved deeply in conversations, in relationships, in small groups and prayer circles with people they know they would never be in conversations with anyplace else around these issues.”

Almighty God, we give you thanks today for opportunities you give us to build better relationships, do justice and be witnesses of the reconciling love we have known through the grace of the Lord Jesus Christ. Amen.