A journey of reconciliation leads to an apology 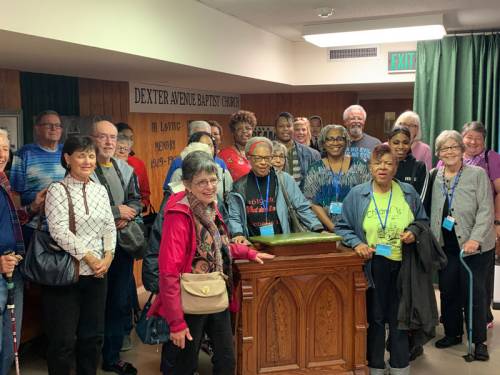 A delegation from the Presbytery of Giddings-Lovejoy poses behind the Montgomery, Alabama, pulpit where the Rev. Dr. Martin Luther King Jr. first preached. Earlier this month the presbytery approved “An Apology to our African American Sisters and Brothers for the Sin of Slavery and its Legacy.” (Contributed photo)

A formal apology by the Presbytery of Giddings-Lovejoy to African Americans for what the presbytery calls “the sin of slavery and its legacy” recently occurred following a “Journey of Reconciliation” last fall to two institutions in Montgomery, Alabama, dedicated to telling the stories of enslaved black people and those terrorized by lynching and humiliated by Jim Crow.

The apology, according to an email from Craig Howard, Giddings-Lovejoy’s leader, and Vanessa Hawkins, the presbytery’s designated associate leader, was “widely accepted by our members” during a February presbytery gathering.

Last October, 38 presbyters from 12 congregations took a bus to Montgomery to learn at the Legacy Museum and the National Memorial for Peace and Justice, founded by public interest attorney Bryan Stevenson and the Equal Justice Initiative. Twenty-three of the travelers were African American, one was a Latina American and 14 were white Americans. The youngest traveler was 15; the oldest was 91.

“The experience was so powerful,” the presbytery leaders said, “that many of the participants returned to the community to join (the presbytery’s Dismantling Racism and Privilege team) and to relate and communicate their shared experience with the wider presbytery.”

Goals and actions grew organically from the group, which spent three days in discussion, silence and prayer before identifying three initiatives:

According to presbytery leadership, the apology, summarized below, has galvanized many members, “and we are committed to partner with them in their efforts. The team has already hosted one forum to determine ways to move forward.”

The apology includes these statements:

“We recognize as people of faith that the only appropriate path for healing and reconciliation is to acknowledge the wrongs that we, the Presbyterian Church, as part of the institutional church structure, were complicit in perpetuating. This was done through the interpretation of selected Scriptures and rationalization to justify human bondage and perpetuate white supremacy and privilege. We apologize for this transgression.”

“We recognize the necessity of building a trusting relationship between white Americans and African Americans. Healing and reconciliation can be done only by acknowledging that slavery is the economic, artistic and religious foundation on which this country is built.”

The apology also notes that St. Louis and southeast Missouri have “a rich history … of heroic actions of the Underground Railroad conductors, preachers and abolitionists, freedom lawsuits, the United States Colored Troops of the Civil War, and more.” The Rev. Elijah Lovejoy, for whom the presbytery is named, paid with his life fighting for freedom of the press and the end to slavery.

But the region has also been “scarred by the legacy of slavery and racism. We acknowledge that the Presbytery of Giddings-Lovejoy has been complicit in such systemic racist decisions as supporting redlining in bank lending practice.”

“We acknowledge that black lives have been devalued beginning with slavery,” the apology states, “and their human dignity continues to be circumvented through the economic and legal systems that are racist as institutions. We apologize for benefiting from and continuing to be part of this social, economic and legal construct. We recognize that the presence and persistence of racism in ourselves and our institutions is the result of the sin of slavery.”

O God, renew in us a right spirit and the courage to receive your gift of unity. Amen.