While painful, discovering the church was not as healthy as it appeared led to renewal 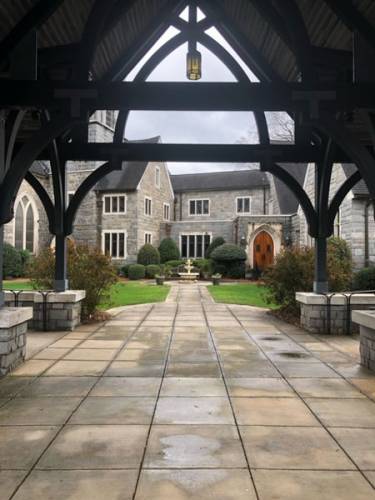 Thanks to participation in the Presbyterian Church (U.S.A.)’s Vital Congregations initiative, First Presbyterian Church of Clinton, South Carolina, began to realize the church wasn’t as healthy as it appeared. Church members say they’ve experienced renewal by re-engaging in serving their community. (Contributed photo)

When the Rev. Dr. Jeri Parris Perkins became pastor at First Presbyterian Church in Clinton, South Carolina, she knew the congregation needed to revitalize. It’s what the Pastor Nominating Committee was looking for when the church called her in 2014.

Perkins said church members didn’t know how God was going to do that for them until 2018, when Trinity Presbytery began a two-year pilot of a new revitalization process from the Presbyterian Church (U.S.A.)’s Office of Vital Congregations.

As Perkins met monthly with other church leaders from the presbytery in pastoral cohort groups formed for the initiative, and as she participated in monthly Bible study on the seven marks with First Church’s session, she said she no longer felt like “a lone ranger.” Because now others began to recognize what she and the PNC knew — that First Church wasn’t as healthy or as vital on the inside as it looked on the outside.

First Church had a beautiful physical plant for worship and education, and a great Christian Life Center for worship. But when members of this large, historic, wealthy, downtown, college-related church took a U.S. Congregational Vitality Survey, which is part of the VC initiative, they found out they were sorely lacking in each of the seven marks.

“We finally saw beyond our surface,” Perkins said. “While painful, it was like a gift to us, because we could see ourselves as others saw us.”

In 2001, Clinton’s textile mills, which had been a vital source of economic prosperity, closed.

Gradually the town’s population began to shrink, with people moving outside of the community to find work.

In 2019, the church’s certified preschool — which had been housed at Thornwell — moved back to First Church. The children’s home had run out of space for the preschool after starting a charter school. Because the church building isn’t currently certifiable, the program had to cut back to four-hour days, causing enrollment to drop and adding to the perception that the church and community could no longer meet the needs of the working parents who still live there.

Acknowledging that the church is at a crossroads with the preschool, Perkins said church leaders are in prayer and discernment as the best way forward to continue to serve the church and the community’s children.

Recently, First Presbyterian took a survey of its church members. Perkins said that 75 percent of them want to be more engaged in the community again, both locally and globally.

“They want to be engaged in mission as well as to write checks to support longstanding mission partners,” Perkins said.

And they wanted a healthier church family that cared for one another in deeper ways. Perkins said the congregation is beginning to recognize that vitality is a spiritual experience — and what really matters is the beauty of the family that lives in that space based on how they are serving the world and community and each other.

First Church has renewed its commitment to shared ministry with the institutions that members helped start, such as the annual Rise Against Hunger initiative with Presbyterian College and in the Livestream ministry with Clinton Presbyterian Community residents. They’ve also recently participated in larger parish conversations with many of the 13 smaller PC(USA) churches in Laurens County.

“Change is afoot. People are starting to catch fire,” said Perkins. “It’s been a long journey, but we are so grateful for our godly heritage, for our promising future and for the Vital Congregations Initiative that helped us see it all with fresh eyes.”

Father, we give you thanks for your blessings and ask that you teach us to share with those who have nothing. We know that you can convert the little that we have into a rich abundance to benefit those who suffer. In the name of Jesus. Amen.