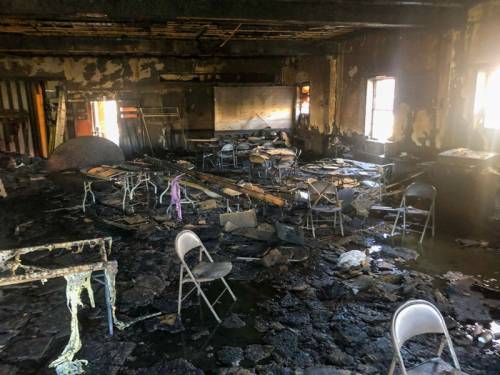 The fellowship hall at Calvary Presbyterian Church in Newburgh, New York, is the heart of the community ministry of the 162-year old congregation just over an hour north of New York City.

In addition to church gatherings, it hosts an annual back-to-school event including more than 1,000 free meals and haircuts, the local Habitat for Humanity MLK lunch, the Newburgh Urban Farm and Food Initiative, a rural migrant ministry, and Black United Growers, to name a few groups.

“The fellowship hall is a community center,” longtime church member and bell choir director Sue Young said, noting a community dinner in the hall usually held the last Saturday of every month.

In early March, that fellowship hall went up in flames in a blaze that destroyed the church addition and most of its contents while completely sparing its 162-year-old sanctuary, which was the first United States church designed by acclaimed church architect Frederick Clarke Withers. According to the church’s history page, Thomas Edison personally persuaded the church’s trustees to make it the first electrified church building in New York State.

“If you don’t believe in miracles, you may want to visit this historic church in Newburgh that survived this devastating fire,” reporter Macy Egeland said, leading her coverage of the fire for Westchester’s News12.

“I thought of Notre Dame,” pastor J. Edward Lewis Sr. said, recalling the call around 12:45 a.m. telling him the church was on fire. “I got there and asked what the situation was, and the fire captain said they were holding the fire in the fellowship hall and keeping it away from sanctuary. I walked away and praised God.”

While the historic sanctuary was saved, the fellowship hall will have to be completely rebuilt.

“This fire is an opportunity to restore, renew, rebuild, and purify,” said Lewis, who is also on the local Presbyterian Committee on the Self-Development of People.

The pastor said he was already encouraging discussion about how to make a rebuilt fellowship hall a green building with features like solar panels and tailor it to better serve the communities with which Calvary collaborates.

“We want to bring this building into the 21st century,” Lewis said.

The church is accepting donations through its website, which is here. Presbyterian Disaster Assistance has offered assistance to support the continuation of the church’s ministry.

And the ministry did not miss a beat, with bell rehearsals taking place the following Thursday night at nearby Union Presbyterian Church.

The cause of the fire has not been precisely determined, but Young and Lewis say investigators believe it was a wiring issue near the stage. A casualty of the fire was a Tiffany stained-glass window that Young, who is a stained-glass designer, says she will work to rebuild, incorporating parts of the old window.

The sanctuary was saved, all involved say, by a thick wall between the fellowship hall and the sanctuary, which kept the fire at bay. Lewis described the sanctuary as “a tinderbox” with lots of wood and paper, and plenty of air for a fire to breathe, if it had gotten in there.

“That wall was a fortress from the fire,” said Young, who choked up several times discussing the situation. “You can stand there and see, on one side total devastation. On the other side, it’s perfect.”

Grant that we, O God, may find new and joyful ways to bear fruit in this world you love so dearly, even as we gladly bear the yoke of Christ given in the covenant of baptism. Amen.