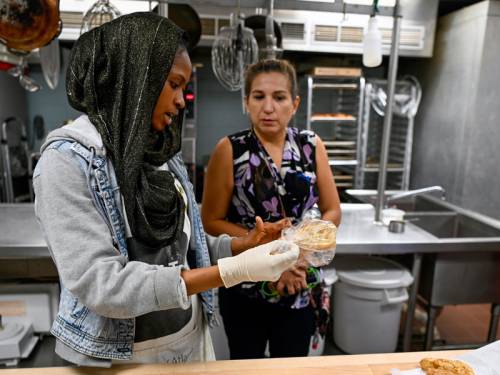 Last November, when they gathered in a park near downtown Detroit, folks from the Dexter-Linwood Cordon neighborhood could see spring. They could see a butterfly garden, kids getting lost in a black-eyed Susan maze, people relaxing in a gazebo and gathering fresh vegetables in a garden. They could see a new season filled with hope for a Detroit block that had seen better days.

Once lined with more than 20 houses, the block now has only two habitable houses. Some were lost to decline and neglect, others to violence such as fire bombing. But with support from the Presbyterian Committee on the Self-Development of People (SDOP), this community is working to create revival.

“If it doesn’t happen, what’s going to happen to the neighborhood?” asked neighborhood resident Ron Matten. Matten belongs to the community group Demographic Inspirations, which is working to turn the block into a multifaceted community gathering area. The project is supported in part by a grant from SDOP, a ministry that supports community- generated and -led projects.

“There’s a lot of people who have been here for years,” Matten said. “We’re trying to create that aesthetic view, so they can say the neighborhood’s getting better.”

As SDOP looks to the future, it is also celebrating its past. This year, SDOP is celebrating its 50th anniversary. The ministry was conceived in the late 1960s and early ’70s as the church’s unique response to poverty and racism in the United States and around the world.

From the beginning of the ministry, the term “self-development” was key. In 1970 the 182nd General Assembly of the then-United Presbyterian Church called for creation of a program to assist “deprived, impoverished or handicapped people, anywhere in the world, in their development,” according to the book “From Dream to Reality: A Contextual History of Twenty Years of the Presbyterian Self-Development Program” by James A. Gittings.

Gittings’ book, which was published in 1993, details the formation of SDOP, along with trials and triumphs during its first 20 years. Since its inception, SDOP has been supported by the One Great Hour of Sharing special offering, and each year a Sunday during Lent is designated Self-Development of People Sunday..

“One of the powerful things about Self-Development of People that is really noteworthy is that it has been a ministry that teaches the church about the intersectional issues of poverty,” said the Rev. Dr. Alonzo Johnson, coordinator of SDOP. “And we do that because our teachers are the community. Our teachers are the projects that we fund and the connections we make in the community. And that’s something that’s incredibly, powerfully relevant about this … that we hear from the communities.”

SDOP invites people in communities impacted by poverty to apply for grants, telling SDOP how they will use the funds to improve the community and what the expected benefit of the project will be to the community. SDOP does not fund organizations. Rather, it wants people in communities to organize, though an organization often will act as the fiduciary agent of the grants, which can be as high as $25,000.

SDOP’s national committee meets throughout the year to discuss potential grantees and to explore issues in the areas where the committee meets. The committee is drawn from across the country, with racial, ethnic, gender and geographic diversity in mind. The latter is important as site visits by committee members or local Presbyterian representatives are part of the SDOP application process.

“The 50th year is about celebration, but it’s also about education,” Johnson said. “And it’s about connecting with our SDOP folks who’ve been involved in this ministry for a long time, but also creating awareness for the church for a new generation to take hold and understand the great and continuous work that has yet to be done.”

God of growth and vibrant life, send us your light and your truth so that we may continue to see Christ in the those who are ravaged by poverty and oppression. Loving God, remind us that your gift of the resurrection is a call for us to be cultivators of generosity and sowers of justice. Redeemer God who takes the side of the poor and disinherited, remind us of your call for us to do so as well. Amen.