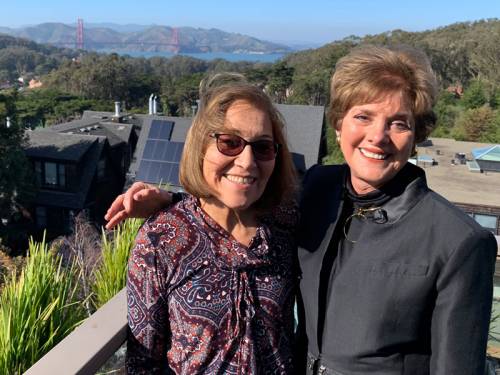 A reunion between a Peace Corps volunteer in Iran in the 1960s and one of her students recently made the national news.

The former student, Iran Murphy, who pronounces her first name “E-Ron” and who lives in California, had been searching for her favorite teacher, Lynne Meena of Louisville, for more than 56 years — a record, according to the Peace Corps. Murphy, who immigrated to the U.S. from Iran in the 1970s, spent most of her life thinking about how much her teacher had changed her life. With help from the Peace Corps and the internet, these two friends reunited in San Francisco on Valentine’s Day. CBS News covered the reunion.

More than five decades had passed, but the bond of friendship that connected these women in English classes in Iran was still as strong as ever.

Murphy’s son, Rosstin, also served a term in the Peace Corps in China eight years ago, in part because he had heard his mother talk about “Miss Meena” his entire life.

It was President John F. Kennedy’s challenge, “Ask not what your country can do for you — ask what you can do for your country” that prompted Meena, then 22, to join the Peace Corps after graduation from the University of Louisville. She asked if she could be assigned to work in the Middle East because her grandparents were from Lebanon.

Before leaving the U.S., Meena completed a 12-week training program at the University of Michigan in Ann Arbor, the site where, on Oct. 14, 1960, then-Senator John F. Kennedy shared his vision for what would become the Peace Corps.

When Meena’s group of 70 Peace Corps volunteers arrived in Iran in September 1964, they stayed at Alborz College in Tehran for two weeks of orientation. The educational work of the Peace Corps in Iran from 1962 until all volunteers were pulled out in 1976 was made possible, in part, through the groundwork and seed planting of the American Presbyterian Mission, which began in 1834 when the Board of Commissioners for Foreign Missions appointed the Rev. Justin Perkins as its first missionary to Iran, then known as Persia.

Perkins planted a church, opened a school for boys and a school for girls and established a printing press. He also translated the Scriptures into the Syriac language, a derivation of the Aramaic alphabet.

Meena received her assignment to teach English in three girls’ high schools in the southwest city of Abadan. Once she got established, the Peace Corps’ acting director of the Division of Volunteer Support said, “Lynne, there’s a TV station in Abadan. Get on it if you can.”

So Meena visited the TV station, knocked on the door of the station director and said, in the Farsi language, “My name is Lynne Meena. I’m with the American Peace Corps. I’d like to see if I can teach an English class on your television station.”

The director replied in English, “Oh, heck, come on in. I went to San José State.”

“He was just a wonderful guy, and he gave me this TV slot,” Meena said. “He said I could have five minutes, three nights a week.” Due to the popularity of the show, the time slot grew to 30 minutes. People watched from as far away as Iraq and Kuwait. According to the U.S. consulate, more than 10,000 viewers tuned in to learn English with Miss Meena.

In Abadan, Meena worked in partnership with the Ministry of Education of Iran, teaching regular and honors English classes of 40 to 50 girls per class in three Abadan high schools.

Holy One, we seek to be fully alive within and without. Shape us according to your purpose, that we may reflect your glory. Bless us to be a blessing. All this we pray in the name of Jesus. Amen.