Methodist Church Milan has become an international model for inclusiveness

‘There is neither Italian nor Filipino, neither Ghanaian nor Indonesian — nor is there Chinese and American, for you are all one in Christ Jesus’ 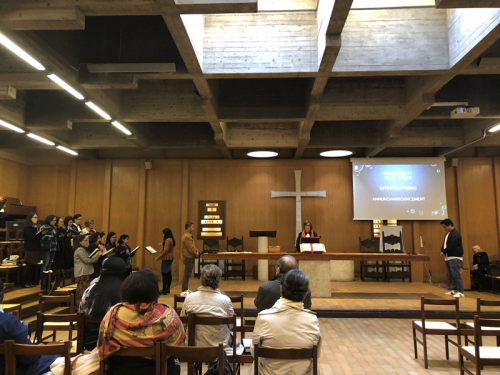 A worship service at the Methodist Church Milan. (Photo by Luciano Kovacs)

When migrants began arriving in large numbers, the Methodist Church Milan started discussions about how to create a culture of welcome. But members didn’t just talk. They are living fully within their own creation that has become a model for like-minded congregations around the world.

The congregation is part of the Waldensian and Methodist Church of Italy, a Presbyterian Church (U.S.A.) partner.

The church has been a receiving congregation for more than 40 years. First, Methodists from the Philippines and Ghana began to arrive. For many years they had separate worship services, but in 2000, the church implemented an effort “To Be Church Together.” Now there are bilingual services and integrated activities across generations.

“As we focus on becoming a Matthew 25 church, I think Presbyterians will be interested in learning more about this church because of its ‘Being Church Together’ model, which focuses on building an inclusive, multi-ethnic community,” said Luciano Kovacs, coordinator of World Mission’s office for the Middle East and Europe.”

As a theological foundation, the Milan church identified Galatians 3:28: “There is neither Jew nor Gentile, neither slave nor free, nor is there male and female, for you are all one in Christ Jesus.”

Here’s the Methodist Church Milan adaptation: “There is neither Italian nor Filipino, neither Ghanaian nor Indonesian — nor is there Chinese and American, for you are all one in Christ Jesus.”

Forty years ago, the congregation was 100% Italian. Its composition in 2021 is 65% Italian, 20% Filipino, 13% Ghanaians/Africans, and 2% other. They range from liberal to conservative traditions and include Methodists and other Protestants, Presbyterians, United Protestants, Waldensians, former Catholics and former Pentecostals.

The composition of the church council includes nine Italians, two Filipinos, two Indonesians, one African and an interim pastor. The German pastor left in early summer to take a position in Karlsruhe, Germany.

There has been a deliberate focus to make the children and youth programs intercultural as well. Their identified challenges have included:

The Milan church has also brought together its cultures to live beyond the walls of the church with activities such as book discussions, multi-ethnic lunches, cooking classes and breakfast service for the homeless. The community center offers a legal advice desk to everyone, not just members of the church.

The Waldensian Church has not only had an impact on the Milan church but has led the way on developing a creative strategy to facilitate a legal and sustainable process of migration for Italy, especially for those who are most vulnerable.

In its research the Waldensians discovered a forgotten, never-implemented article in the Italian Constitution and offered a proposal to the government to open humanitarian corridors from Lebanon and Libya. Article 10 of Italy’s Constitution states, “A foreign national, who is denied — in his or her country — the enjoyment of the democratic freedoms established by this Constitution shall be entitled to the right of asylum in the Republic under such conditions as shall be established by law.”

More recently, France, Germany and Belgium have adopted similar policies. The humanitarian corridors became the model to offer a safe passage to safe countries and facilitate the process of integration.

The Waldensian church is the largest Protestant denomination in a country that is overwhelmingly Catholic. Today, there are about 20,000 Waldensians scattered throughout Italy.

The church is known in Italy for its liberal practices. It ordained the first female cleric in 1967 and was the first Protestant church in Italy to bless same-sex civil partnerships in a church service.

Creator God, you send us miracles that help us know that in you everything is possible. When we work together and gladly serve one another, great things happen. We are grateful for anyone who takes the equivalent of loaves and fishes and generously feeds others. Amen.