A traveling and visibly scarred banner 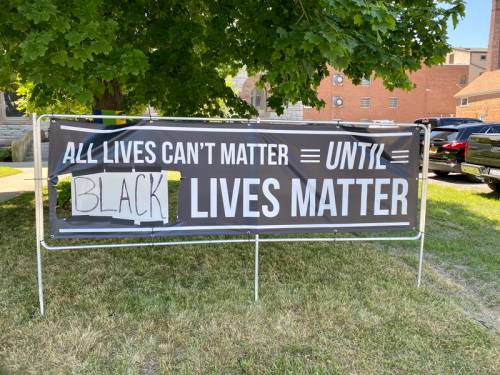 The Black Lives Matter sign after the Rev. Patrick Heery fixed it, leaving visible the scars of the damage. (Photo by Patrick Heery)

The Rev. Patrick Heery acknowledges that the church sign that got stolen, returned and then vandalized — all in a matter of days — is just a piece of cloth.

After George Floyd was killed by Minneapolis police, Westminster Presbyterian Church, which was founded by abolitionists, decided to put the banner in front of the church in downtown Auburn, New York, a community nestled against one of the Finger Lakes in central New York.

Within weeks the “All Lives Can’t Matter Until Black Lives Matter” sign was stolen. Police recovered it within 90 minutes of the crime being committed.

Heery wrote about that incident here, describing it on the eve of the Fourth of July holiday as the story of the traveling sign and a divine message of hope as he and a police officer talked about ways they wanted to work together to improve their community.

“I quickly posted that story in the morning,” he said, “because I had back-to-back funerals I was leading.”

Later that evening, within 24 hours of the sign being stolen, the story had “blown up” on Facebook, having been shared more than 1,000 times.

“It was resonating in a powerful way that Black lives matter,” Heery said.

But two days later, late Sunday night or early Monday morning, a white man who hasn’t been identified vandalized the sign, cutting out the word “Black.” Because of the positive attention the banner had received, Heery said he anticipated something like this might happen. Initially he was upset and angry. He described it in his Facebook post “as someone seeing beauty and stomping on in.”

As he stood in front of the church that morning, Heery met another police officer in solidarity with the values of the church and Black Lives Matter. As the officer was investigating the new crime, Heery saw people driving by and smirking at the vandalism.

And then a woman drove by shouting, “They fixed that sign!”  For him it was an indication that what was happening to the traveling and now defaced sign wasn’t just about one bad apple, or another white supremacist in the community. Knowing that a percentage of people in the community held this viewpoint strengthened Heery’s resolve.

“I wrote in big black letters on white paper ‘BLACK,’ restoring the message,” he said. “Leaving visible the scars of someone violently removing ‘Black’ from all lives.”

As the day went on, Heery received phone call after phone call from community members and friends sharing their anger about what had happened. Black leaders told him about the pain they felt driving by the banner.

While holding the pain and the fear of the community he serves, requests for interviews were coming in for Heery, bringing even more attention to that piece of cloth — both to the message it bears and what it represents.

Church member Kim Patch took it upon herself to put together a crowdfunding campaign on GoFundMe for $500 to pay for a new banner. By the end of the day the church had raised more than $3,000. As local artists called the church saying they would make them a new banner, someone anonymously gave a donation to pay a graphics company to produce a new sign. Westminster’s session, which came up with the idea to create the original banner, voted that night to recommit itself to the Black Lives Matter message by approving a new banner.

“There were some worries it might escalate, or that a person could get hurt,” Heery said. “But the evolution is they are willing to take more risk and be more public with their values. I’m proud of them for that.”

After receiving a suggestion from the president of the local NAACP chapter, where Heery serves as religious advisor, the church, where Underground Railroad hero Harriet Tubman was married, is considering using its crowdsourcing funds to blanket the city with additional Black Lives Matter signs.

“As a message to our culprit,” Heery said. “For every sign you destroy, 10 will rise in its place. Hate will not silence love — love will just get louder.”

Loving God, help us to be people of faith, hope and love in a world that needs them desperately. Help us to express your love. Teach us to cling to the possibilities of your transforming power and allow us to help others to do the same. In your loving and welcoming presence we pray. Amen.