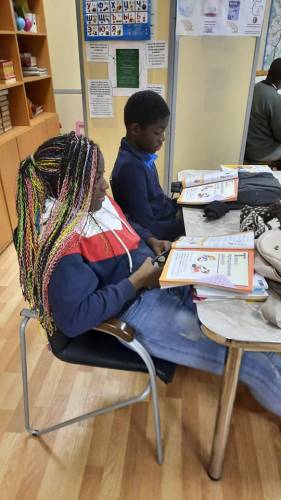 Since the collapse of the Soviet Union, many have migrated to Russia for a variety of reasons. People from countries of the former Soviet Union came because economic opportunities were better in Russia during this time. In the past 10–15 years, there has been a growing number of people being trafficked from African nations. Often, they have been told that if they can get to Moscow, they will have a gateway to Europe and ultimately to financial success. Traffickers lure with many promises that are, of course, never fulfilled.

Upon arrival, they are warmly met at the airport by fellow countrymen or other Africans but have quickly been confronted by a harsh reality. The traffickers have delivered them to overcrowded apartments and they have been given menial jobs in difficult circumstances. Oftentimes, they have found themselves out on the streets in harsh winter temperatures passing out flyers from stores.

Usually, they have not realized that their visas are not correct for work and will expire quickly, leaving them illegal within weeks or days of their arrival. There is a deep sense of shame and trauma in those who have found themselves in this situation. Moscow Protestant Chaplaincy (MPC) has been able to work with embassies to help repatriate some, but others refuse help because their families sacrificed so much to get them there.

In the early 2000s, MPC became aware of the plight of such migrants and began to seek ways to support them. They established a social ministry program that provides a warm, safe space to gather and use a computer, a medical advice center, a clothing closet, a food distribution program and an educational program. The migrants are all victims who arrived with hope for a better future and now trudge through an extremely dangerous space.

Children are often the unseen victims of this global migration. Many children have been sent ahead by their families with the hope that the whole family might follow. They now live in camps for unaccompanied minors and often fall prey to drug rings and prostitution. The parents are traumatized and find it difficult to provide basic parenting. Numb from the life they have fallen into and without family support to guide and help raise these children, neglect is prevalent. These children, surrounded by languages from many countries, find themselves with no language fluency.

The question before us is how to alleviate that sense of hopelessness and to provide safety, security and skills for a better future and it is one that we are constantly striving to answer. Currently we are in the process of designing a language program for children who find themselves without adequate language skills. The MPC needs resources for their many ministries, but the proposed project with the children of trafficking victims is a new endeavor. We covet your prayers. Quite simply, we cannot do this without you. For further questions, please contact mpcpastor@pcusa.org.

God of all of us, we pray that you provide a sense of loving protection over those who find themselves traumatized in this situation. May you bring a sense of hope and restoration upon their lives. May you also give those of us who accompany them on this journey a sense of compassion and an ability to help bring dignity into the lives of the people we serve. Loving God, may you restore us to wholeness. Amen.