If it’s rooted in God, our hope is sure and certain 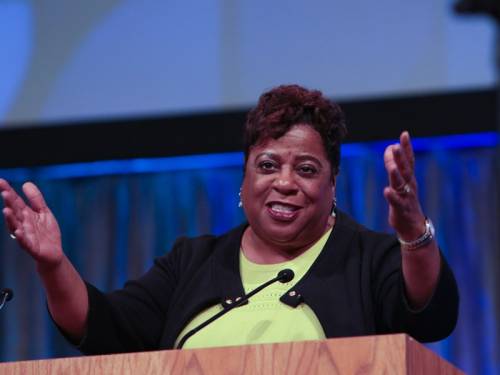 In the early church described by Paul in the 12th chapter of his letter to the Romans, authentic love was in short supply and friction between Gentile and Jewish followers of Christ was apparent everywhere.

“Where the church stands on social issues,” the Rev. Dr. Diane Moffett, president and executive director of the Presbyterian Mission Agency told the recent triennial gathering of Presbyterian Women in a sermon on Romans 12:12–13, “creates friction, and no small amount of frustration, even now.”

Moffett thanked PW for being among the groups and agencies, congregations and mid councils to accept the Matthew 25 invitation. There are congregations, she said, who refuse to embrace the Matthew 25 calling because of two of three of its focuses — dismantling structural racism and eradicating systemic poverty. “Some churches do not want to talk about racism,” Moffett said. “But racism is talking with all of us. It is screaming in our ears.”

When it comes to eradicating systemic poverty, some churches are “committed to treating the symptom by curing the disease,” Moffett said, including advocating on behalf of those who are poor. “They act boldly and compassionately.” But others “insist in only feeding those who are hungry and clothing those who are naked. They are not willing to change the conditions that create poverty.”

“If the Matthew 25 focus on dismantling structural racism and eradicating systemic poverty is too controversial, then perhaps following Jesus is also,” Moffett said, noting the term “poor” is mentioned nearly 200 times in the Bible “and, with few exceptions, it refers to those who are economically and materially poor and the injustice perpetuated against them.”

In Matthew 25, Jesus judges all nations by how they treat those who are living in the margins, Moffett said. “People create racist systems that cause people to live in the margins. … These systems also intersect with gender bias, the oppression of women, people who are differently able, older adults and folks in the LGBTQ community.”

“Different is not deficient,” Moffett said. “Color does not make us right any more than being in a donut shop makes us a donut. Racism is a sin. It goes against the Christian principle to love your neighbor as yourself.”

Moffett told her hearers she’s “grateful for women who know about hope. Women who rejoice in hope, who laugh in the face of fear, who smile when confronted by obstacles, who cry when overwhelmed by the issues of our day — not the cry of ultimate defeat or surrender, but a purpose-driven cry. A cry that releases lament, that washes away the debris that keeps our souls from seeing God’s hand in every situation. I am grateful for women who may face seemingly insurmountable challenges, but, in the words of activist the Rev. Jesse Jackson, ‘keep hope alive.’”

Moffett said she praises God for “women who blazed trails and made paths where there was none to follow.” Those women include the Rev. Dr. Katie Geneva Cannon, “who navigated the waters of rejection, gender bias and racism”; Maria Fearing, who sold all her belongings to finance her first mission to the Congo in 1894, becoming the first Black mission co-worker in that region; and Lucy Craft Laney, who refused to give up hope when the General Assembly of the Presbyterian Church did not grant her funds to educate African American children. But Mrs. F.E.H. Haines, then president of the denomination’s Women’s Department, came into Laney’s life and advocated for her.

“Thank God for our mothers and grandmothers, daughters and sisters, aunties and nieces of every color, hue and persuasion — women who rejoice in hope,” Moffett said, echoing the gathering’s theme. “They inspire me, they encourage me — and I dare say you as well.”

Dear God, open our ears, eyes and hearts to sense the possibilities all around us for mission and evangelism. Make us communities that sense needs and do everything in our power to meet them. In the name of Jesus, the Christ. Amen.