Burkhard occasionally returns to the U.S. and is available to visit congregations. Email him to extend an invitation to your congregation or organization.

Subscribe to the e-group Burkhard moderates to connect supporters in Roma work.

Advocating for the Roma people in Europe is central to Burkhard’s ministry. With a population of an estimated 10 – 12 million people, the Roma are the largest minority group in Central and Eastern Europe. Formerly referred to as “Gypsies,” a term now considered pejorative, they have encountered discrimination and oppression for centuries. “Our partner churches have an important role in building bridges between these people groups and the larger society,” Burkhard emphasizes. “However, since some churches find that they themselves were implicated in a history of segregation and conflict, they sometimes need outside partners who mediate and encourage this bridge-building role.” He works with partners to combat anti-gypsyism, racism specifically targeting Roma; to promote inclusion and equal opportunities for Roma, including in congregational and church life; to develop Roma leadership; and to improve economic development and education for Roma.

Another focus of Burkhard’s ministry is partnering with churches and organizations as they attempt to support refugees and migrants. He walks alongside these partners as they advocate for safe passage, humanitarian visas and family reunification, among other necessities. “In a context of growing populism, nationalism and racism in many countries, churches in many European countries are vital in calling for solidarity, hope and openness with respect to international and human rights,” he explains. “This is particularly important in promoting humanitarian reception, a welcoming atmosphere and the integration of refugees and migrants into society.”
In his ministry with both the Roma and refugees, Burkhard works in close cooperation with the Conference of European Churches (CEC) and Churches Commission for Migrants in Europe (CCME).

As regional liaison for Central and Western Europe, Burkhard helps connect Presbyterians in the United States with partner churches, organizations and programs in Central and Western Europe. He also implements regional strategies and provides support for mission personnel. In this role, he seeks to understand the needs of partners and to connect them with the resources of the Presbyterian Church (U.S.A.). “In former Eastern Bloc countries in Central Europe, our partner churches have been re-establishing congregations, seminaries and diaconal ministries of all kinds,” Burkhard says. “They seek support, recovering from 50-plus years of different dictatorships that have affected their sense of leadership, lay involvement, holistic mission and voluntarism.” Burkhard strives to help build strong personal relationships among ecumenical partners and nurture a process of mutual learning.

Europe has a long, sad history of discord and conflict, most of which coincides in one way or another with religious divisions. Europe’s greatest enduring rift, that existing between its eastern and western parts, falls approximately along the old division between the Greek- and later Slavic-speaking Eastern Roman Empire once ruled from Orthodox Constantinople and the Latin- and later Romance- and Germanic-speaking Western Roman Empire once ruled from Catholic Rome.

When the relative stability of Catholic Europe began to collapse at the end of the Middle Ages, Czech-, English-, German- and French-speaking renewal movements — led by such figures as Petrus Valdes, Jan Hus, John Wycliffe, Martin Luther and John Calvin — sought not only to redefine salvation and faith but to eliminate the hegemony of the Roman Catholic Church. Inevitably these renewal movements led to a century and a half of armed conflict, the after-effects of which still divide historically Protestant northern Europe from historically Catholic southern Europe.

Muslims and Jews figure into Europe’s sad history of religious divisions reinforcing political divisions. Jews have been demonized by rulers as a way of securing their subjects’ loyalty. This scarlet thread in European history led to the Holocaust during World War II and still continues in many places in Europe. Similarly, the Muslim expansion into southwestern Europe (711 – 1492 C.E.) and in southeastern Europe (1354 – 1878 C.E.) precipitated anti-Muslim sentiment in many parts of Europe, which even today is reflected in electoral politics in many European countries.
One hundred million Europeans died as combatants or civilian victims, or as victims of mass exterminations in the two world wars of the last century. If the First World War was, in George Kennan’s words, “the great seminal catastrophe of this[last] century,” then the Second World War, the Cold War, the Balkan wars of the 1990’s and the various authoritarian or semi-authoritarian regimes now imposing their rule in much of Central and Eastern Europe and Euro-Asia were the knock-off effects of that.

War, authoritarianism and indifference have been a nearly lethal combination for the church in much of Europe. Where the church has not been suppressed, it has often been co-opted and compromised. Where the church has neither been suppressed nor compromised, it is often regarded as irrelevant. Despite these factors, many church members, directed by the Spirit and inspired by the example of Jesus, witness to Christ’s Gospel.

Born, raised and educated as an engineer in the former German Democratic Republic (East Germany), Burkhard lives with his family near Berlin.

Before German reunification, he worked as a volunteer peacemaker and environmentalist with the Evangelische Kirche Berlin-Brandenburg, one of the Protestant churches in the former East Germany.
Burkhard’s activities in East German churches were part of an ecumenical program called Conciliar Process for Justice, Peace and the Integrity of Creation. After Germany’s reunification, these experiences guided him as he undertook a variety of roles: lobbying for the conversion of military goods and sites to civil ones, serving as an elected mayor of his town and working in an environmental networking program in Berlin.
Burkhard began mission service with the PC(USA) in 1998, when he was named coordinator for special projects with the Jinishian Memorial Program, a PC(USA) ministry that addresses the needs of new generations of Armenians coming of age after the Armenian genocide. Focusing on the Republic of Armenia and the Middle East, his work with the program oversaw the initiation and implementation of new community development plans and provided information and advice about sustainable development.

In his current role as regional liaison of Central and Western Europe and the Roma, Burkhard Paetzold is helping PC(USA) partner churches get a fresh vision of the Christian faith that transcends old divisions and builds on new opportunities. “Christians and non-Christians need to be enabled to see Christianity in a new light,” Burkhard says. “The challenge for Christians is to work for peace, justice and the integrity of creation and to communicate expressions of faith, hope and solidarity within a seemingly overwhelming ‘new world’ of greed, selfishness and material temptations.”

Burkhard sees his role of building bridges among people in Central and Western Europe and between Presbyterians in the United States and partner churches as one of his key contributions in mission service. Over the last few years, Burkhard has connected Presbyterians who are fighting for the rights of refugees with refugee initiatives in Central Europe and in the Mediterranean. As a powerful example of how Presbyterian World Mission can facilitate relationships in which people from disparate backgrounds learn from each other, Burkhard shares, “When we were at our Europe and Middle East mission co-worker retreat prepared by the Reformed Church in Hungary at the peak of the so-called ‘refugee crisis’ in 2015, our Farsi- and Arabic-speaking World Mission colleagues were able to listen actively to refugees stranded at the Budapest train station. These colleagues shared their experience with congregations in the States, and within a few months, PC(USA) congregations started to actively support the refugee work of the RCH.”

Watch a video of Burkhard Paetzold 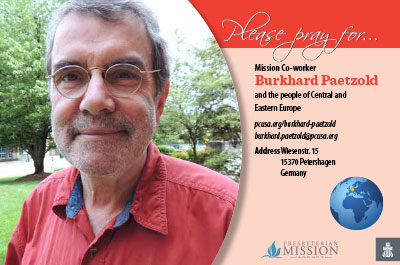 As regional liaison, Burkhard focuses much of his ministry on work among the Roma people, Europe’s most marginalized group. He facilitates and supports the efforts…

Give to the ministry of Burkhard Paetzold