Connecting Korea’s past and present for the future of mission

‘Korean-English Dictionary of Presbyterian Missionaries in Korea 1884-2020’ highlights the contributions of 1,000 mission workers 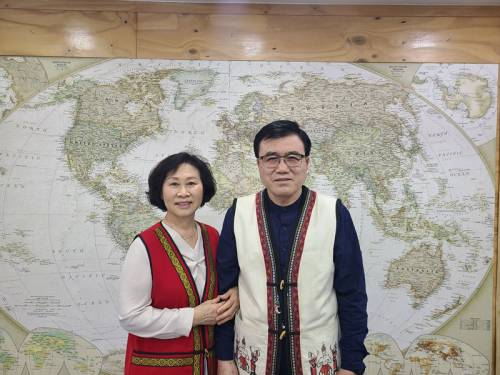 Yen Hee and Choon Lim celebrate completion of the first “Korean-English Dictionary of Presbyterian Missionaries in Korea,” covering 136 years of mission in Korea from 1884 to 2020. (Contributed photo)

This book chronicles who came to Korea and what they did as Presbyterian missionaries in Korea over the past 136 years. It highlights about 1,000 Presbyterian missionaries, beginning with Dr. Horace Newton Allen and Frances Ann Allen, who arrived in 1884 as Korea’s first Protestant missionaries. It continues through the decades to mission co-workers Kurt Esslinger and Hyeyoung Lee, who are serving today.

There are two main sections in the book. The first lists missionaries’ names alphabetically, along with brief biographical information. The second lists the missionaries according to the year they arrived in Korea.

The idea to produce a historic compilation of mission workers in Korea had been on the mind and heart of the Rev. Choon Lim, World Mission’s regional liaison for East Asia, since he and his wife, Yen Hee Lim, began their third mission appointment in 2012, serving in Seoul, South Korea.

Since their appointment as PC(USA) mission co-workers in 1991, Choon has been the chief relational bridge connecting global partners in South Korea, North Korea, Hong Kong, China, Japan and Taiwan with the PC(USA), while Yen Hee is engaged in ministry through the home.

Over the years, many Korean Presbyterians have wanted to learn more about their Christian ancestors. Until now there was no such official guidebook in Korea.

“The major problem we confronted in completing this project was deciding who to include in this book,” Choon recently wrote in a letter to mission supporters. “Many Presbyterians came to Korea as missionaries. They were sent by local churches or institutions for different reasons. We decided to include only those who were sent by the Presbyterian Church’s General Assembly.”

The merger of northern and southern branches of the church to create the Presbyterian Church (U.S.A.) in 1983 also made it challenging to find out who belonged to which denomination, Choon said.

The Lims asked Young-gun Choi, a professor at Hannam University, to travel to the Presbyterian Historical Society in Philadelphia to assist with the necessary research. He spent one week gathering information, but he was unable to complete the task in that amount of time. Finally, the Lims spent a full week at the Presbyterian Historical Society last August to complete the research.

“Before our visit, we emailed them about our purpose for coming. When we arrived and started to read the wealth of stories of former missionaries, our hearts were touched. We saw their dedication and hard work to spread the Good News to Chinese and Korean people by word and deed. Reading these moving stories gave us the energy to continue our research for seven days, beginning at 9 a.m. and staying on until the building closed. Each evening when we left, our eyes were red and our bodies exhausted — yet the next morning we couldn’t wait to read more stories of mission work,” Yen Hee said.

Many times, while gathering information about the former missionaries, Choon couldn’t stop crying, Yen Hee said, “Those who came to Korea in the early years sacrificed their lives to spread the gospels’ Good News to the Korean people, as the living conditions in Korea at that time were very poor,” she said. “They had to face all kinds of diseases and had to learn the difficult Korean language.”

Choon founded the Korean Presbyterian Church of Indianapolis, which began in the Lims’ home. Choon became a deacon, elder, pastor and a mission co-worker of PC(USA) to Korea and Taiwan. After serving World Mission for 30 years, he will retire at the end of 2020.

The timing of the publication of the book, during the COVID-19 pandemic, is a reminder of the importance of staying connected, the Lims said.

Today’s Focus:  Korea, Past and Present

God of grace, we ask that you would give us creative ways to serve people so that they may one day claim the hope and joy of abundant life in Christ. Amen.