A ministry of intellect and street smarts

The Rev. Fred Hanna’s career switch from microbiologist to pastor of Delaware’s first black Presbyterian church was orchestrated for such a time as this 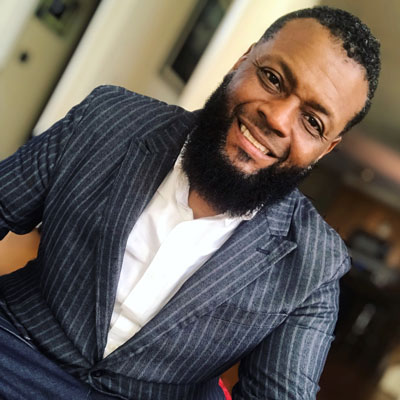 The Rev. Frederick A Hanna Sr. is the third installed pastor at Community Presbyterian Church in New Castle, Delaware. (Photo by Fred Hanna)

As a scientist and science lover since he was a child, Fred Hanna has always found the disconnect between science and religion to be odd, if not utterly horrifying. Once, in his early 30s, he was having a conversation about dinosaurs with a Christian who told him, “Dinosaurs aren’t real. They were made up. Science made them up.”

“Why would you say that?” Hanna asked.

“Because they aren’t in the Bible,” the person said.

“I’m like, ‘Oh, my God, this is why I stayed away from church all my life. You people, you don’t get it.’” There are lots of people like that, he said, people who can’t seem to connect the Creation story to some aspects of evolution.

“I’ve never had a problem connecting my ideas about science to my faith,” said Hanna. “For me, science and the universe prove God, they don’t disprove God.”

Early in his career, Hanna was an analytical microbiologist working at a pharmaceutical plant. As he moved into other positions, his core was always science.

“As a microbiologist, we’d break down an element into its smallest element, and then we’d try to split that open and understand it,” he said. “So, I use that to connect to my way of studying the Scriptures. Scripture had to have some kind of meaning. It had to make sense. It had to follow a pattern. There had to be principles there that my faith was built on, so I would literally ‘mine’ the Scriptures. My love for and affinity for expositional preaching comes from there. It’s line upon line, precept upon precept. It’s very much a scientific discipline that I follow. Even in my study discipline. The whole process is methodical.”

As pastor of Community Presbyterian Church in New Castle, Delaware, where he has served since 2013, Hanna has been leading his congregation in online daily devotions and virtual church worship on Sunday mornings, since the state government limited the number of people who could gather publicly due to the COVID-19 pandemic.

“I think I have an advantage in that I didn’t grow up in the church,” Hanna said. “So, I’m not as attached to the building and these sacred articles as some people are. I’ve always thought that these walls can be a hindrance to God’s work; I might be in the minority as far as that’s concerned, but I don’t have any emotional attachment to being in this space that’s going to allow me to put people’s lives in danger.”

Community Presbyterian, the first African American congregation in New Castle Presbytery, was founded in 1955 by civil rights activist the late Rev. Maurice J. Moyer. The new church building opened in 1998. It is connected to the original building and has a sanctuary that seats 250 people. On a typical Sunday, average attendance is about 90.

While nothing has been typical or average in these days of coronavirus, “the support of our members has been amazing,” Hanna said.

Community Presbyterian Church is proud of its heritage and rich traditions, but it is also striving to be a socially and culturally relevant church “talking to you in language you can understand and about things you can relate to,” Hanna said.

Looking back, Hanna said he noticed something happening in the church world the past couple of years — especially the past year.

“The church has to figure out something other than the old machine, which was ‘butts in the pews, coins in the plate’ and that’s how we fund the ministry. That’s just not going to work anymore, going forward,” Hanna said. “We see that even more now with us being out of our buildings. A lot of churches were already cash-strapped and are even more cash-strapped now.”

Hanna has worked quite a bit in the past couple of years writing grants and trying to be creative in looking at the future of church and ministry.

“My dream,” he said, “is that we’d be able to take our church to a place where we do all the work of ministry through grants, and the plate money kind of takes care of payroll and that’s about it. That’s where I’d like to see us progress to.”

God of grace, we thank you for the joy of serving you by serving others. Continue to open our hearts to the needs around us, and may we show forth our concern with hearts and hands, so that your children may be showered with your love. Through Jesus Christ our Lord. Amen.