Choon and Yen Hee are periodically in the United States and available to speak to congregations as their schedule permits. Email them to extend an invitation to visit your congregation or organization.”

Choon Lim is the regional liaison for East Asia that covers Taiwan, China, Japan, South Korea and North Korea. He provides support for partner churches, strengthens the work of mission personnel by providing guidance and pastoral care, and implements regional strategies. He has a special focus on North Korea, where people are hungering for food and for the good news of Jesus Christ. He also works to help effect reconciliation between the two Koreas. Choon is supported in this ministry by his wife, Yen Hee.

More than 1.5 billion people, about 38 percent of the population of Asia or 22 percent of all the people in the world, live in East Asia. Japan and South Korea rank among the 10 most advanced economies in the world. While China’s economy is not as advanced as South Korea’s or Japan’s, the total economic output of its 1.3 billion people makes it the second largest economy in the world. Taiwan is also home to a thriving economy and is considered to be a developed country by the International Monetary Fund. North Korea, however, is one of the world’s poorest and least developed nations. In terms of Christian influence, South Korea has the highest percentage of Christians than any other Asian nation, with about 30 percent of the people claiming affiliation with a church. Chinese Christianity has experienced remarkable growth in recent years, and the Chinese government reports about 25 million believers. The percentage of people claiming to be Christians in Japan, North Korea, and Taiwan is relatively small.

About Choon and Yen Hee Lim

The legacy and promise of cross-cultural mission have shaped the life and ministry of Choon Lim. He is extremely grateful that some Presbyterians from the United States answered God’s call to serve in mission in Korea. “Because of that, I am a Christian,” he says. “I’m a fourth generation Korean Presbyterian. My great-grandfather accepted Jesus as his Lord and Savior, and then my grandfather, who was an elder, became a Christian. Then the Christian faith came down to my mother, and it was handed down to me.”

In 1972 Choon came to the United States, where he pursued higher education. Upon graduation from Indiana University, he worked in respiratory therapy at an Indiana hospital and eventually became a supervisor. After sensing a call to ministry, he entered Louisville Presbyterian Theological Seminary and went on to serve as an associate pastor at Hanmee Presbyterian Church in Itasca, Illinois, and as a mission worker in his native Korea.

Choon could work comfortably in both the Korean and American cultures, but in 1997 he was presented a cross-cultural challenge that caused him some hesitation. World Mission invited him to take a position in Taiwan, and he wondered if he could learn Mandarin Chinese, a very difficult language to master, in middle age. While trying to discern God’s will, he met Don McCall, a retired missionary to Taiwan. “I’ll give you my mission torch,” Don told Choon. “Please go to Taiwan and serve the people.” Six weeks later, Don died while Choon was visiting Montreat, North Carolina, where the retired missionary lived. Choon went to the McCall home and prayed with Don’s wife and children. “It’s hard to explain, but while we were praying I was able to say: ‘I’ll go to Taiwan and carry Don McCall’s mission torch.’”

Choon and his wife, Yen Hee, carried the torch well, and its light continues to shine across Taiwan even though the Lims are no longer there. It can be seen through the lives of hundreds of aboriginal students the Lims reached through the collegiate ministry they founded. Many of their former students are clergy and lay leaders in the Presbyterian Church of Taiwan.

When Choon became a mission co-worker in 1991, he saw a Bible verse written on a monument at a missionary cemetery that has continued to inspire his own service in mission. “The Bible verse was from Philippians 1:21, ‘For to me, to live is Christ, and to die is gain,’” he says. “This word from God has strengthened me to do mission work and has helped me to be a faithful disciple in word and deed. For the sake of the gospel, one must be willing to live one’s life to glorify God’s name.”

Choon and Yen Hee’s first mission assignment was on board the medical ship “Salvation,” serving at the invitation of the Presbyterian Church of Korea. Choon’s main responsibility was to serve as a director of the Island Medical Mission, and Yen Hee was a nurse in that ministry.

Yen Hee is a graduate of Seoul Nursing College and has worked in hospitals both in the United States and Korea. Choon is a member of the Chicago Presbytery, and Yen Hee belongs to Hanmee Presbyterian Church. 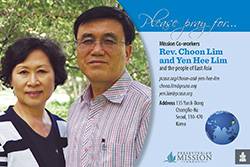 Use this card as you pray for Mission Co-workers the Rev. Choon Lim and Yen Hee Lim. The card includes a photo of them and…

Give to the ministry of Choon and Yen Hee Lim