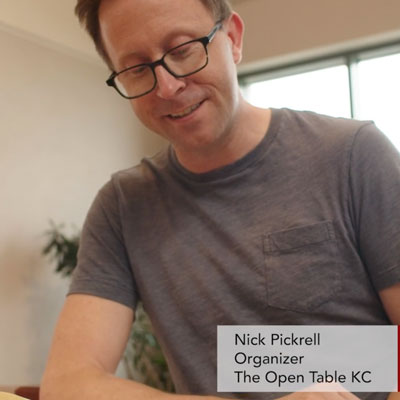 Nick Pickrell, organizer of The Open Table KC, has never set foot in a seminary. But after five years co-leading this new worshiping community in Kansas City, Missouri, he’s going through the process of becoming a commissioned ruling elder. “I wanted to be more connected to the PC(USA) denomination,” he says in the new 1001 Worshiping Communities video, “Becoming Presbyterian” at vimeo.com/416070513.

Before starting The Open Table KC, in partnership with Second Presbyterian Church in Kansas City, Missouri, Pickrell lived in a Catholic Worker House run by a PC(USA) minster.

Brockhaus grew up in conservative evangelical denomination. She didn’t see herself as a woman in ministry, thinking it wasn’t an option for her. Despite that she went to seminary and also completed her clinical pastoral education (CPE) residency. “Even though I have (a Master of Divinity degree) I don’t’ t feel a call to ordained ministry in the traditional sense, she says. “But I do feel a call to this community. I found a home.”

The Rev. Gad Mpoyo grew up a United Methodist in Democratic Republic of Congo. He came to the U.S. for MDiv. Program at Chandler School of Theology at Emory University in Atlanta. While he was there, a professor who happened to be Presbyterian asked him to run a homeless shelter.

As a student, he had also started an outreach ministry in Clarkston, Georgia. And as Presbyterians who volunteered at the homeless shelter heard about and saw the work he was doing, they asked him if he would be willing to start a new worshiping community, which became Shalom International Ministry in Clarkson, which is mostly made up of immigrants and refugees.

“To me, that was sign from God,” Mpoyo said. “I could never imagine in my wildest dreams that the PC(USA) would reach out to a United Methodist pastor.”

After going to seminary, Libby Tedder Hugus moved to Casper, Wyoming, with her husband Jeremey, expecting to pursue ordination with the Nazarene Church. Wanting to get to know the community, she started working in a coffee shop. One day she struck up a conversation with a woman who was a PC(USA) minister, who invited her to a small gathering of clergy.

Hugus was hosting a weekly meal in her home, and the conversations she was hearing around the table were those of the “nones” and “dones,” whom she defined as “folks who had never pursued a conversation about spirituality or religion formally, for a whole variety of reasons,” she said, “or they just didn’t have any experience with it.”

Hugus was invited to explore the possibility of starting a new worshiping community. The Table in Casper went public in 2015. She is now in the process of pursuing ordination — and will be ordained sometime in 2020.