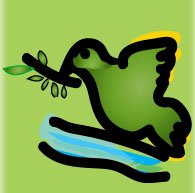 The green dove was designed by Patty Chapman of Stone Soup Marketing in Ossining, New York.

What’s the use of the Social Creed for the 21st Century? Yes, the Social Creed gets cited in books that deal with ecumenical social ethics, but how many read those after they leave seminary? Well, actually, Cynthia Rigby’s book “Promotion of Social Righteousness” (2010) did get broader circulation, and it reprints the Social Creed as the key illustration of what the church stands for in its social witness. Her title is one of the six “Great Ends of the Church” and it means both social justice and public integrity.

And yes, the Social Creed for the 21st Century (2008) gets cited by the National Council of Churches of Christ in the U.S.A. (NCC) and its member churches in some of their public statements. The NCC is rooted in the Federal Council of Churches, which started in 1908. One of its first actions was to adopt a short, non-doctrinal Social Creed of the Churches, which focused on the needs of workers and the goal of ending poverty. It called for safe working conditions, rights to organize, and what became Social Security — nearly three decades later!

So, the Social Creed of 2008 was adopted for the 100th anniversary of the first Social Creed, to remind the 35 denominations of their heritage. It includes human rights, marks of a just society, peace and environmental sustainability, with a biblical vision and clear Christian values. [The Social Creed provides a basis for the broad set of concerns in the revived Poor People’s Campaign, for example.]

But Sunday schools are among the biggest users of the Social Creed, and they often post the kids’ version poster on a bulletin board. This is partly because the Scarborough Press, a small curriculum publisher in a church in New York State, produced placemats that promoted the Creed for kids’ ethical learning. But it may also be because the kids’ poster has bright colors and a fun green dove of peace.

A Prayer in the Spirit of Matthew 25 and the Social Creed:

Indwelling God, we pray for employers to pay more of what the Social Creed (2008) calls a “family-sustaining” wage. This would be a living wage, but not just for one individual, for we are called to raise children of your covenant, people who will worship, witness to and share in your care for creation. To raise children, and to partner each other, we need more time than working two jobs allows. Be with us when we stand up for our rights, and when we oppose even the artfully outsourced oppression of others.

God, we remember that Jesus was a working man, and know that we meet him by your Spirit in the workplace today. Help us with these questions:

Great God, just as Jesus worked in his day to the fullest, let us work while it is yet day. And let us be part of your economy of salvation, where labor is never simply a commodity, and where no one works for cash alone, but out of genuine desire to serve. Amen.