With a lot of help from their friends, here’s the story of their arduous return to the U.S. 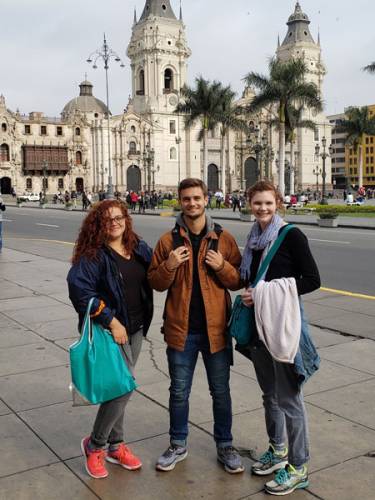 When the State Department recommended that U.S. citizens return home in March due to the coronavirus pandemic, the Rev. Everdith Landrau, working with the World Mission crisis management team, followed the directive of the Rev. Dr. Diane Moffett, president and executive director of the Presbyterian Mission Agency, to close the five international YAV sites for the remainder of the year. Most of the YAVs were able to obtain flights quickly because they were near major airports. YAV Juliana Bernier, who was serving in Moyobamba, Peru, was able to leave April 2 with a group of American tourists who were staying in the area.

But YAVs Rachel Adams and Andrew Avram were serving in Huánuco, Peru, a 10-hour drive from Lima, in the mountainous central Andes. Adams was working with Casa del Buen Trato, a shelter for female adolescent survivors of sexual abuse. Avram was at Granja Lindero Ecológica, an ecological farm run by the nongovernmental organization Paz y Esperanza, a member of the Peru Joining Hands Network.

On March 15, Peruvian President Martín Vizcarra called for a 15-day lockdown for the entire country. No one was allowed outside unless they were going to a doctor, pharmacy or grocery store. Violators would be jailed. The lockdown was announced that day at 8 p.m. and went into effect at midnight. Adams and Avram had no choice but to shelter in place in Huánuco with their host families. They began making travel plans to leave for the U.S. as soon as the restrictions were lifted.

After two weeks, the lockdown was extended; it’s still active today. Those travel plans had to be scrapped. Heightening the anxiety for the YAVS and for site coordinator Jenny Valles Koball, they were being told the U.S. Embassy would be ending repatriation flights to the U.S. on April 10, just a few days away.

And “we had been told we were very unlikely candidates to be repatriated since we’re young, were far away from the embassy and had a safe place to stay,” said Adams. “At the same time, we were seeing other YAVs arriving home and it was hard. Juliana and I were first to ask to return home because we felt we were an additional burden on our host families and our work sites. We were crushed.”

Koball and her husband and fellow mission co-worker Jed called embassies, police and transportation authorities. It was a 10-hour drive to Lima. They needed transportation waivers and they had to be at the embassy by a certain time or they would lose their seats.

Moffett and several members of World Mission’s crisis team were on the phone and wrote letters to government officials in the U.S., as well as both the U.S. and Peru embassies.

Finally, on the afternoon of April 5, Adams received a call that she and Avram had seats on a flight out the next day. They had to be in Lima at 10 a.m. Monday. As they were saying goodbye to their host families and finishing their packing, the embassy called back and said they didn’t realize they were so far away and wanted them to give up their seats since they might not be able to make it to Lima in time. They still didn’t have the transportation waiver they needed. Adams asked for 15 minutes. She called Koball for help.

Koball was able to reach a Peruvian transportation official who connected her with another official. That person knew how to get the necessary documentation from the embassy. He offered to forward it to the checkpoints they would have to clear on their way to Lima.

At 11that night, Avram’s host father, Johony Rosas, picked them up in a borrowed car to begin the journey to Lima.

They were stopped three times at police barricades. At the fourth, their passports and car were photographed, but for the next several hours they had a police escort most of the way to Lima.

Rosas, who only had a 24-hour travel pass and would be jailed if he violated it, slept one hour and then headed home to Huánuco. Koball said he asked for nothing except a little help with gas money.

Dear God, thank you for showing us such great love through sending your one and only Son. Help us to remember the true meaning showing loved to one another. In your name we pray. Amen.