Rev. Amy Hunt says Chaplain Corps is a guiding light through the darkness

Then the Lord said to Moses, “Why are you crying out to me? Tell the Israelites to move on. Raise your staff and stretch out your hand over the sea to divide the water so that the Israelites can go through the sea on dry ground. — Exodus 14:15–16 (NIV) 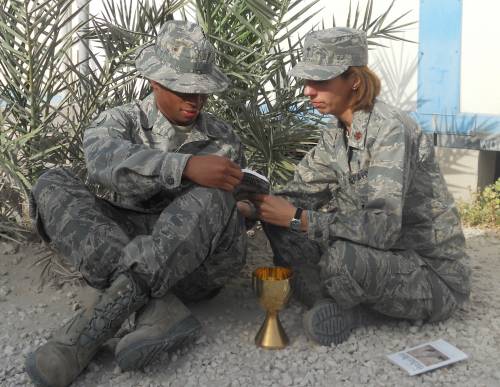 The Rev. Amy Hunt is a minister of the Word and sacrament who serves in the United States Air Force as a chaplain. She began her service to the men and women of our nation as the world was confronted by a new era of war and suffering which continues to this day. The following is her recounting of how the events of 9/11 solidified God’s call in her life:

The morning of Sept. 11, 2001, dawned not as an ordinary day but a day on which my husband was traveling to Memphis for a job interview, so certainly a hopeful day. As a civilian pastor of two small congregations, with two small children I was in my routine of balancing motherhood and church work.

As I was helping my children ready themselves for school, I had the morning news on in the background. When my son, who was 4 years old at the time, told me that a plane had crashed into a building, I did not pay much attention. His continued insistence on my watching the news with him is, to my recollection, when it dawned on me that something horrific was occurring. Watching transfixed with him, it was the second plane crashing into the Twin Towers that confirmed that this was not accidental. From that point, the day became one of sadness, angst and suddenly full of uncertainty. I remember debating with my husband as to whether he should turn around and come home.

My day was no different than many other people’s day. It began with routine and ended with daunting uncertainty. Questions, so many questions from my children, my congregations and me. While many of these questions were unanswered and left behind like so much dust on the road, the one question I could not shake was, “what am I going to do?” An odd question, at an even odder time, but the question kept rising every time I pushed it down; it popped back up to the surface, like bubbles rising from a lakebed.

How could I, a pastor of two small churches in Missouri, do anything that would in some way reconcile the outpouring of evil that we had just experienced? Was there some meaningful way to protect the good that I wanted for our children and all the children across our country? My father was a retired Army Colonel so perhaps it was his influence to pursue action — or perhaps the influence of Our Father?

I prayed, I listened to God and then joined the Air Force. Without hesitation, I put my civilian ministry to the side, and entered the Air Force as a chaplain. I knew that I could add value to the Chaplain Corps and put to rest the one question that had been so much like a thorn in my side, the question of what could I do?

To this day I cannot and will not forget Sept. 11, 2001. To this day I am ever thankful of the opportunity to serve as a chaplain, to minister to our Airmen and their families. To this day I continue to view the Chaplain Corps as a guiding light through so many shades of darkness.

Chaplain Hunt has served across the globe in her chaplaincy duties. From caring for women, men and families here in the United States to coming alongside service members and civilians deployed in the Middle East, Chaplain Hunt has taken the good news to those who might not have access to religious support for nearly two decades. In her current assignment as a recruiter, Chaplain Hunt has been instrumental in seeing nearly 400 religious ministry professionals become Air Force chaplains.

The events of 9/11 caused immeasurable suffering and grief around the globe. But they also formed a new generation of servants such as Chaplain Hunt who continue to seek the good and ensure that all who serve may practice in peace.

Almighty God, on this day we remember the tragic events of Sept. 11, 2001. Events that resulted in the deaths of countless innocents and stoked fear and hatred around our globe. Now, 19 years later, we come before you, seeking your guidance and presence as we pursue your good for all people wherever they may live.

We thank you for your servant Amy Hunt and for all, who like her, have responded to your call to journey where sent to pursue righteousness and peace as ministers of your good news even when it may put them in harm’s way.

We pray for those who still remember 9/11 as the day their lives were upended by the loss of loved ones and those who continue to suffer from the consequences of that day.

Grantor of true peace, please guide the leaders of the nations around your globe to pursue peace and goodness as they exercise their authority. Permit them to look beyond themselves, setting aside prejudice and jealously to seek righteous equality as together we form a new reality in which all can prosper, enjoying security and love.

May your name be praised. Amen.