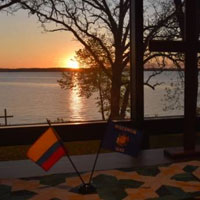 Winnebago Presbytery got a chance to learn from its counterpart in Colombia earlier this year when five visitors from Urabá Presbytery spent a week in northern Wisconsin.

During the course of the presbyteries’ 13-year relationship, “they have offered more to us than we have to them,” said Michael Lukens, stated clerk for Winnebago Presbytery. Many Wisconsin groups have visited South America, but until this year no more than one or two Colombians at a time had been able to make the trip north due to the difficulty of obtaining visas.

“We’ve been very intentional that this is not a charity, it’s not a one-sided relationship,” said Susan Phillips, pastor of First Presbyterian Church in Shawano, Wisconsin. “We pray together and we serve one another as we serve God.” The Colombian visitors, she said, have “experienced violence and grief and displacement. They have lived their faith in much more challenging circumstances, and spiritually they have a great deal to teach us.”

“It was just a great, great time of retreat and worship and fellowship and celebrating,” said Jeff Todd, vice moderator of the presbytery and a ruling elder at First Presbyterian Church in Wausau. “I can hardly put into words how wonderful it was.”

In addition to the scheduled presentations, “the so-called down time was the richest part,” Lukens said. “We talked about our difficulties, not just in Urabá but in our own presbytery.”

The Presbyterian Church of Colombia, which numbers only a few thousand people in three presbyteries, would be easy to overlook in the South American nation’s swirling currents of corrupt government forces, paramilitary groups that owe allegiance to no one, and drug cartels that also build schools and housing. During a presentation years ago about those complexities, Phillips recalled, one Wisconsin churchgoer asked, “Who are the good guys?” But, she concedes, “Colombian reality is messy. Every side has its ugliness.”

In the midst of all that, the Presbyterian Church of Colombia tries to aid the displaced, support relatives of the murdered, and lobby for justice. Some church leaders have received death threats. In Colombia, “each group gets its way more when people are afraid of them,” Phillips said. “But the church says, ‘Fear not.’ They’re the ones who speak out, who name names, who tell the truth.”

Referring to Irlene Doria, one of the five visitors, Phillips said, “This is my friend standing in front of me, telling me how her family has been murdered.”

“The Presbyterian Church of Colombia is small but with a very large impact on education, evangelization, and social work for peace in the country,” said Diego Higuita, secretary general of the Presbyterian Church of Colombia, via email. Higuita, who has visited Wisconsin several times, said the most important thing he has learned from the partnership is “the possibility of confessing faith in the company of people on the other side of the world to work together for peace.”

Gracious God, open our hearts and minds, and teach us to be abundantly generous with all that we have. Help us not to be timid but to boldly proclaim your good work in this world. Amen.