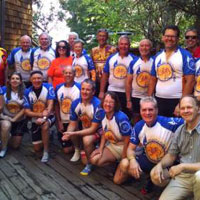 Participants in the 2014 Pedal for Protein along the California Coastline to raise funds for community food pantries. In two years, more than $49,000 has been raised. Photo courtesy of the Presbytery of the Redwoods.

For the third year in a row, a group of avid cyclists between 30 and 70 years of age will take to the California roads this month to combat hunger. The Pedal for Protein ride is scheduled for September 18–22. The Presbyter of the Redwoods launched the ride two years ago to help community food pantries provide protein-rich foods to families in need.

“In the past, the tour has lasted seven days, covering more than 429 miles,” said Patty Sanders, Hunger Action Advocate and ride director. “This year we’ve shortened the trip to 268 miles over five days.”

In its first two years, the bike ride has raised approximately $49,000. The presbytery’s hunger task force then provides grants to grassroots food banks at the end of the year.

“It is so expensive to live in this area, particularly in the southern part of our presbytery. Housing is very expensive, and people are paying tremendous amounts for one- or two-bedroom apartments, and many are still recovering from losing their homes,” said Sanders. “Many people don’t have jobs or are working two or three jobs to make ends meet. The homeless are just a small part of the people the food pantries serve. Most of the pantries are helping the working poor who have had medical emergencies or no insurance at all, making it difficult to feed their families.”

Sanders recently attended the 222nd General Assembly in Portland, Oregon, and staffed the Presbyterian Hunger Program’s booth in the exhibit hall. She talked with numerous Presbyterians about the fundraiser.

“I try to encourage churches and presbyteries to consider doing something like this to help their various community needs,” she said. “You don’t have to be an athlete, just have a goal to raise money, whether it is for a food bank or a sports program for children or another need. You just have to have a heart for this and work with someone who is good at organizing.”

“One of the things that’s so terrific about Pedal for Protein is that Patty connected her work as a Hunger Action Advocate to a passion she already had for fitness in order to address a specific problem in her presbytery,” said Jessica Maudlin, associate for the Presbyterian Hunger Program’s Enough for Everyone ministry. “This is a perfect example of the way that PHP connects to local presbyteries in a way that allows for what’s best in the local context.”

Creator God, we are grateful for food that nourishes our bodies and for servants who, having heard your voice and felt your Spirit in their lives, share a compassionate discipleship that seeks to alleviate hunger. May your Spirit descend on us, that we too might live as those who witness to your love and grace in our community. In Christ’s name we pray. Amen.