Haitian mission co-worker reflects on the value of education 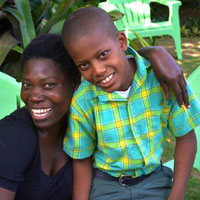 The pair of shiny, ankle-high boy’s boots sat in my kitchen most of that day.

I’d seen Paul Sinette standing outside the gate when I left my house that morning. Paul Sinette works in my house, usually showing up about 9:30 each morning. She cooks, cleans house, and generally makes my life better.

She teaches me about the culture of Haiti by sharing her life with me. She tries hard to understand the American lifestyle that I often revert to, sometimes preferring French fries and macaroni and cheese to the Creole meals of rice and beans, soups, and natural juices.

But mostly, through her devotion to her 10-year-old son, Carlins, she teaches me the value of an education in this impoverished country.

That morning, Paul Sinette seemed surprised to see me leaving so early. She grinned at me and said in Creole that she was waiting for the shoeshine guy to finish with the boots. She didn’t have to tell me whose they were. She has a special grin she shares when anything has to do with Carlins.

He’s a tall boy, funny and studious with a touch of mischief. Paul Sinette tells me of his misadventures—crashing the secondhand bike she found for him for Christmas, trying to get out of his homework with funny stories, and making excuses when his grades slipped one grading period.

And then there’s the morning that Paul Sinette came rushing into the house with a manila envelope. She pulled out Carlins’s report card. All of his grades had gone up.

Still grinning, she carefully put the report card back into the envelope and tucked it into her purse. One afternoon when school dismissed early, Carlins came to the house to wait for his mom. While she finished working, he completed his homework.

The United Nations Development Program reports that Haitians who are 25 and older received on average only 4.9 years of education, and only 29 percent attended secondary school.

According to World Bank statistics, even though as many as 90 percent of Haitian children are enrolled in school, less than 30 percent are at the age-appropriate grade level. And 80 percent of schools in Haiti are operated by private organizations, rather than by the Haitian government.

A good number of those private schools are sponsored in part by Presbyterian Church (U.S.A.) congregations.

The parents I know in Haiti have a strong desire to send their children to school. They sacrifice to pay the tuition, and they will find the best schools they can afford.

Paul Sinette stopped going to school when she was 10. She’d gotten sick, and by the time she recovered, her parents could no longer afford the fees. But her child will go to school. No matter the cost. No matter the sacrifice.

I caught myself glancing at Carlins’s boots sitting in my kitchen most of that afternoon. They reminded me, again, of the work so many of us are doing to improve the lives of Haitian people.

And they reminded me, especially, of what the Haitian people are doing for themselves.

Heavenly father, your unconditional love inspires us to be loving, welcoming, and hospitable to our neighbors. Pour into our hearts your compassion; strengthen and guide us as we go forth to make your kingdom tangible. Grant us your peace and surround us with your presence. Amen.