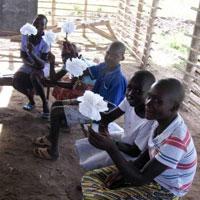 As part of a workshop for victims of trauma, children make crafts related to the theme of healing the wounds of their hearts. (Photo by Debbie Braaksma)

In conjunction with the Women’s Department of the Church of Christ in Congo, Presbyterian World Mission co-worker Christi Boyd recently helped facilitate the first Healing Hearts training event in the city of Goma in the Democratic Republic of the Congo.

Healing Hearts is a Bible-based curriculum designed to help children heal from trauma. The curriculum was developed by the Trauma Healing Institute of the American Bible Society. Women leaders in eastern Congo identified 27 candidates to receive the training, which was designed to enable churches in eastern Congo to care for children who have deep emotional and spiritual wounds caused by war, rape, and other traumatic experiences.

For three days the women reviewed the Healing Hearts training material, along with teachers, social workers, and leaders with whom they work. Then some 50 children joined the group for the next five days to work with the trainees as they applied the newly learned insights.

Combining biblical and mental health resources with intervention, the trainees incorporated the Healing Hearts methodology as they worked with trauma-affected children to help heal them emotionally, build their confidence, and restore their relationship with others and with God.

The current situation on the ground demonstrates how desperately this training was needed, Boyd said. Extreme violence has been occurring in Beni, which is about 200 miles north of Goma. One on Saturday recently, more than 50 people were reportedly killed in machete attacks, Boyd said. “Since October 2014,” she wrote, “Beni has been experiencing sprees of brutal killings by a militia that started as a Ugandan rebel movement, but has since moved into Congo and is said to have been recruiting many new members there.”

Boyd said the killings around Beni have been extremely brutal and have increased in frequency and numbers of victims. The death toll has risen to at least 700 people in the Beni area, with a significant number of those in the last several months.

In addition to her mission work in the Congo, Boyd works in three other French-speaking African countries, Madagascar, Niger, and Rwanda, and one non-French-speaking country, South Sudan. She accompanies global partners as they seek to remedy the marginalization of women and children in their communities, and engages with Presbyterian constituencies in the United States that want to come alongside and promote those efforts.

Boyd and Mama Bertha Nzeba, director of the Church of Christ in Congo’s Department of Women and Families, ask PC(USA) members to pray for the people of Beni, as well as for those who participated in the trauma-healing event.

God, please bless the children in the eastern Democratic Republic of the Congo. Bless the children who
have lost their families. Transform their grief into strength and courage. Bless the girls and boys who have been injured in body, mind, and spirit during years of turmoil. Make them whole again. Bless the children who believe that they are unwanted and unlovable. Mend their hearts and minds and open new pathways of happiness for them. Bless everyone involved in the creation and teaching of the Healing Hearts curriculum. Bless the mission co-workers and local leaders in their efforts to bring healing and wholeness to these precious children. Bless the adults in eastern Congo who already provide good role models. In Jesus’ name we pray. Amen.