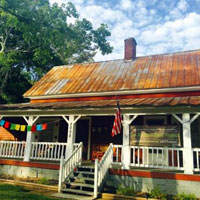 The way Mark Roberson sees it, it was Roswell Presbyterian Church’s turn to plant a church.

Roberson, a ruling elder for over 50 years—18 at Roswell—knew about church planting. He’d worked with the the Presbytery of Greater Atlanta’s New Church Development Commission, and in 2011 he just knew it was Roswell’s time.

“We had done some very exciting mission projects both locally, in terms of affordable housing, and internationally,” Roberson says, “but since we had come to a conclusion on some of those initiatives that were in a maintenance mode, our pastor, Lane Alderman, said, ‘We need a new big thing that will excite the congregation.’ Out of that came this question: ‘Why don’t we plant a church? We’ve never done that.’” And just like that, the seed—that would eventually take root as the Mustard Seed Project—was planted.

Roswell established a business plan that called for Roswell Church to support the new worshiping community for five years. Roswell then launched a fundraising campaign.

To bring that mission home, Alderman—who died earlier this year—started a sermon series in 2013 about the “religious nones,” centered on a young atheist whom he called “Phil,” to help the congregation embrace the vision of starting a new worshiping community that would reach out to a growing segment of the population with beliefs like Phil’s.

With a site for the new worshiping community selected in Suwanee, Georgia, Roswell then called Rev. Zac Morton to be its associate pastor. He spent his first six months there with missional responsibility solely for the Mustard Seed Project.

“Zac preached, he was involved, he has a great personality for relationships, he made a lot of good connections with Roswell,” Roberson says. “He has a lot of people who are supportive of and praying for what he is doing in Suwanee.”

What Morton is doing in Suwanee is making an impact. He is reaching out to the “religious nones,” primarily by convening a Sunday morning hiking group as well as by partnering missionally with the Gwinnett Children’s Shelter. He also convenes a weekly dinner and discussion group, for which the core group of the Mustard Seed Project selects weekly topics.

“My role at those meetings is first of all to facilitate the discussion,” says Morton. “What I always do is try to bring in and bear witness to where either the example or life of Christ or the Christian tradition comes into that topic.”

People in the community learn about the hiking group and the Monday evening meetings primarily through meetup.com or by personal invitation from Morton, who volunteers at several community organizations, or a member of the project’s core group.

Morton says the hiking group averages 20 to 30 people a week. The Monday evening dinner and discussion group has an average attendance of 12 to 20.

“What the hiking group has done for us is that it gives me and some of our core group of people who want to invite people to reengage with their faith a very natural, nonthreatening way by which to forge a relationship and to do it on a regular basis,” says Morton.

At the beginning of every hike, the group exchanges names and responds to an icebreaker question. Then Morton tells the hikers that the group is sponsored by the Mustard Seed Project and distributes cards with the new worshiping community’s contact information. As a result, Morton says, roughly 65 percent of the people who attend the Monday evening discussion come from the hiking group; the others are mainly people that he or members of the core group have met at different venues.

Morton is gratified to see people connect with God in new ways.

“We had one guy in particular who hasn’t prayed out loud in 10 years, and he’s been leading prayer at the end at our group time,” he says. “You’re tempted to say that it’s little things like that that are exciting, but they’re not little at all; they’re actually huge. Examples like that, of people that you might take for granted in the [traditional] church world, seeing people like that guy really get involved is really the coolest thing. That’s what we’re here to do.”

Gracious God, thank you for giving us gifts to share and strength to serve you faithfully. Amen.