Standing in a long line of reformers

In late October 1517, an obscure Augustinian monk teaching at a minor German university offered a set of propositions, inviting an academic debate. Many Presbyterians can picture Martin Luther nailing his 95 Theses on the door of the Castle Church in Wittenberg, but we are hard-pressed to say what the theses were about, and why they sparked a movement that both reformed and divided the church. 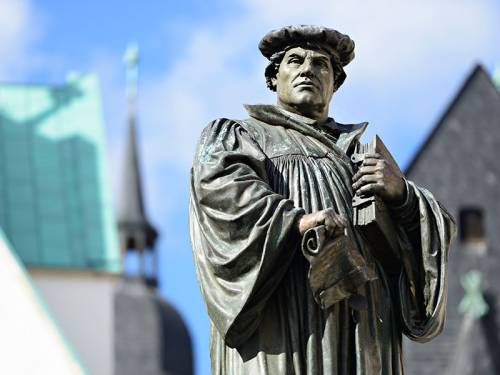 Luther’s post was titled “Disputation on the Power and Efficacy of Indulgences.” It condemned the use of indulgences, a practice based on the assumption that guilt is forgiven by God but punishment for sin can be reduced through prayers, good works or alms (monetary donations) as directed by a priest.

Luther’s attack on indulgences began by turning to the gospel: “When our Lord and Master Jesus Christ said, ‘Repent,’ he willed the entire life of believers to be one of repentance” (Thesis 1). The theses proceeded to deny that priests have power to forgive sins, and to attack the practice of selling certificates of forgiveness: “It is vain to trust in salvation by indulgence letters” (Thesis 52). Instead, “The true treasure of the church is the most holy gospel of the glory and grace of God” (Thesis 62).

Luther’s harsh critique of indulgences could not be dismissed as abstract theological quibbles, for it assaulted the ecclesiastical apparatus, denying the church’s power to grant remission of sins for the purchase of a piece of paper.

This was a critique anyone could understand; the pope and bishops understood it all too well. The church responded to Luther by demanding his silence. Luther refused, the conflict escalated, and soon reached the point of no return. It was not anyone’s intent to divide the church, but Luther’s combativeness and the intransigence of the leadership produced a schism that has led to 500 years of continuing church divisions.

Although Luther posted his 95 Theses 500 years ago, 2017 does not mark the anniversary of the idea of reformation, and Luther was not the first reformer. There were plenty of reformers before and after Luther. Popes Leo I, Gregory the Great and Gregory VII accomplished major church reforms hundreds of years before Luther was born. Benedict, Francis, Jan Hus, John Wycliffe and many more sought church reform, some successfully, some not. Beyond Luther, distinctive church reforms were initiated by Zwingli, Calvin, Cranmer, Wesley and others. Catholic reforms undertaken in the Council of Trent continued through the 20th century’s Second Vatican Council.

The enduring accomplishment of the 16th-century Protestant Reformation is the continual recalling of the church to its true treasure, “the most holy gospel of the glory and grace of God.” Its enduring heartbreak is the continual fragmentation of the church. The Reformed motto, ecclesia reformata semper reformanda secundum verbum Dei — the church reformed always to be reformed in accord with the word of God — is testimony to the continuing necessity of reformation, including reform of Protestantism’s tendency toward persistent division.

“The Reformation: A 500-Year Perspective”
Video by the Presbyterian Foundation
pcusa.org/generosity

“Foundations of the Faith”
Online exhibit by the Presbyterian Historical Society
pcusa.org/foundations

Gracious Lord, open our eyes and hearts to see your mission in the world, and give us discernment and courage to participate in ways that bring glory to your name. Amen.